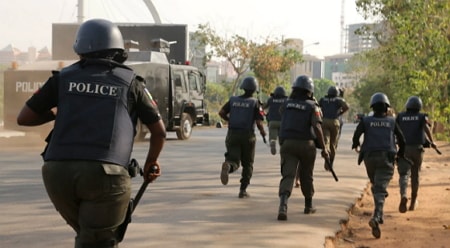 Mrs. Ijeoma Chukwu, woman who lost her son has accused policemen attached to Badia Division of killing his 16-year-old son, Emmanuel, and carting away his body.

Emmanuel was allegedly hit by stray bullet on Sunday morning while standing in front of their 7, Fadaini Road, Ijora- Badia, residence.

It was gathered that some policemen from the division had fired sporadic shots to disperse rampaging youths who pelted the policemen with stones.

The youths were angry after police prevented a woman, said to have kidnapped a five-year-old girl at Giwa Street, from being lynched.

Irked by the police action, the youths mobilised to the station and threatened to raze the building.

The policemen later fired shots to repel the crowd and chased them towards Fadaini Road where a stray bullet allegedly hit Emmanuel.

Lamenting her son’s death, the distraught mother described the policemen as heartless, claiming that they denied her from seeing the victim’s body.

According to her, as soon as the bullet hit the boy, the policemen ran to the station with his corpse.

The woman said the policemen threatened to shoot her if she did not leave the station.

“Those policemen are heartless human beings. My son was killed right in front of our house. He was sleeping inside the house that morning when people started shouting about a woman who kidnapped a baby.

“Few minutes later, my neighbours called that police had killed my son. I rushed out immediately and saw the policemen carrying my son away.

“I ran after them and got to the station. When I got there, I told them I was the boy’s mother and that I want to see him. They refused and threatened to shoot me if I did not leave the place.

“I was helpless. I was there crying and begging them to give me my son that they have killed but they refused. They did not listen to me and they took his body to the mortuary. My husband is not around. He went home for burial. His brothers called to tell him about the incident.

However, the police denied the teenager was killed by their bullet, saying the rampaging youths were armed and shot indiscriminately.

The command’s spokesman, Chike Oti, a Superintendent of Police (SP), told our Correspondent that person who died fell in front of the police station.

“A woman was about being lynched by youths but she was rescued from jungle justice and taken to safety.

“The youths armed with firearms, petrol bombs, stones and other dangerous weapons, fired at the police station. They were threatening to set the station ablaze.

Continue Reading
You may also like...
Related Topics:heartless, human being, nigerian, police