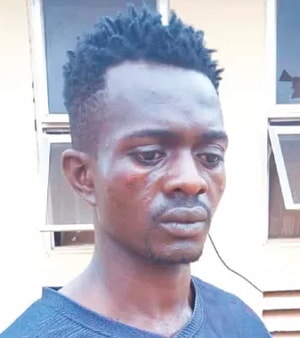 A young man identified as Chigozie Ugwu has been arrested in Enugu for allegedly killing his best friend.

The suspect in his 20s reportedly stabbed 35-year-old Arua Nwonye in the stomach around 10:30pm at his home in Udenu LGA of Enugu state following an argument over a girl on Sunday the 11th of March 2018..

He then fled the scene of the murder before residents rushed his victim to Nwosai Foundation Hospital where he gave up the ghost.

The runaway suspect was picked up on Monday at his hideout in Amegu Ejona Orba area of Udenu.