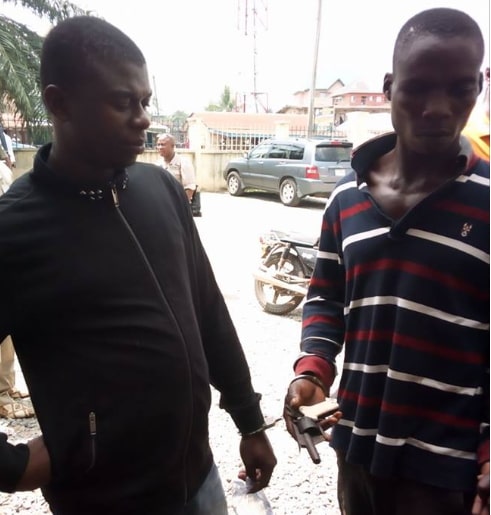 A dismissed Police officer identified as Felix Nwogugu has been arrested by the operatives of the Abia state Police command for an alleged arms and ammunition racket.

The Commissioner of Police in the state, Mr. Ene Okon who confirmed his arrested in a statement said he was nabbed in connection with an armed robbery case in the state.

The CP added that the surveillance patrol team of Isiala Ngwa Area Command in the state, while on patrol in the area sighted two suspected hoodlums operating on motorcycle with registration number GE 418 QC on the Isiala Ngwa axis of the Eungu Port Harcourt express way.

Okon stated that on sighting the Police detectives, the suspects jumped off the motorcycle and fled into the bush and abandoned a bag on the motorcycle.

The Police boss pointed out that the Police team gave the suspects a hot chase which led to the eventual arrest of one of the them identified as Chiedozie Martins who hails from Umunkpeyi Mbawsi, in Isiala Ngwa North LGA.

He added that a search of abandoned bag revealed that a locally made Revolver pistol with its three live ammunition were in it.

He stated, “The suspect confessed to their nefarious activities which led the investigation and arrest of one Felix Nwogugu a dismissed policeman who supplies them with Ammunition. investigation is still in process to arrest of other members of the gang.

Nwogugu however confessed to the crime in an interview with our correspondent. He said he gave the gun to martins to provide security for himself while on election duty.

He said, ” The gun is my own, but I had no need of it again, that was why I gave it to martins to protect himself during the election period.

“I told him to dispose the gun after the election but he did not listen to my advice, that was how we landed into trouble.

Also Martins admitted that he acquired the gun to protect himself from attacks from some political thugs that allegedly invaded his community from Agulaeri in Anambra state.

He said, “I asked Nwogugu to give me the gun for my safety during the election, but when the election was over I kept the gun because I wanted to be using it to protect myself”.