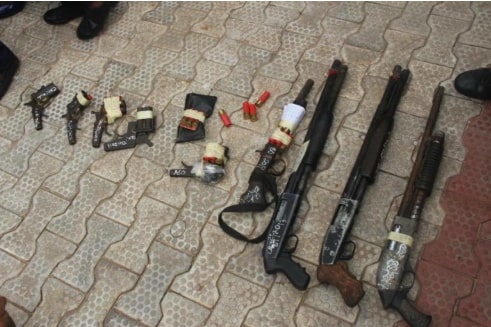 FCT police has announced the arrest of one , 48, said to be the “spiritual father” of armed robbers, kidnappers and other criminals terrorizing motorists and other road users along the Abuja/Kaduna highway.

The suspect, who hails from Dutsinma Local Government Area of Katsina State, is said to specialize in providing spiritual cover for criminals operating along Abuja-Kaduna expressway and parts of other North-West/North-Central States.

Abubakar was arrested in a forest, at Galadimawa Village, Kaduna State.

Force public relations officer Frank Mba, who made this known in Abuja, also announced the arrest of one Godwin Ige, a.k.a ‘White’, 28, said to be the fourth member of the gang responsible for the kidnap of Channels Television Staff Mr Friday Okeregbe.

Mba said the suspects were arrested by detectives from the Inspector General’s Intelligence Response Unit (IRT) and other operatives attached to Operation Puff Adder, launched to wipe out criminals operating on the country’s highways.

The police spokesman, in a statement said:

“In continuation of efforts to rid the Abuja – Kaduna Expressway of Kidnapping and other heinous crimes, cracked detectives from the IGP Intelligence Response Unit (IRT) and other operatives attached to Operation Puff Adder have arrested one Mallam Salisu Abubakar, 48yrs old, a native of Dutsinma LGA, Katsina State. The Mallam, a self-confessed spiritual father of kidnappers terrorizing Abuja-Kaduna expressway and parts of other North-West/North-Central States of the Country, was arrested on 16th April, 2019, following painstaking intelligence and subsequent manhunt, in his hideout, in a forest, at Galadimawa Village, Kaduna State.

“Investigation has clearly implicated the suspect for aiding and abetting the commission of several high-profile armed robbery and kidnapping operations in the North West and North Central States of the Country. The suspect is notorious for providing spiritual guidance and intelligence for kidnappers, before and after their operations. His arrest, no doubt, will assist Police operatives to apprehend several other kidnappers and vicious criminals still at large.

“Similarly, the operatives on 14th April, 2019, in Abuja, arrested one Godwin Ige a.k.a ‘white’ ‘m’ 28years old, a native of Akoko-Edo LGA of Edo State, the fourth member of the gang responsible for the kidnap of Channels TV Staff, Mr. Friday Okeregbe. The operatives recovered from him One (1) Berretta Pistol, One (1) Locally Made Pistol, Eleven (11) Live Ammunition, Two (2) live Cartridges and One Honda Accord Car with Reg. No. KWL 420 GU with which the victim was kidnapped on 22nd March, 2019.

“The IGP while appealing for public support, patience and understanding assures that the Police and other security agencies will not rest on their oars until our homes and highways are made safe and secured”.