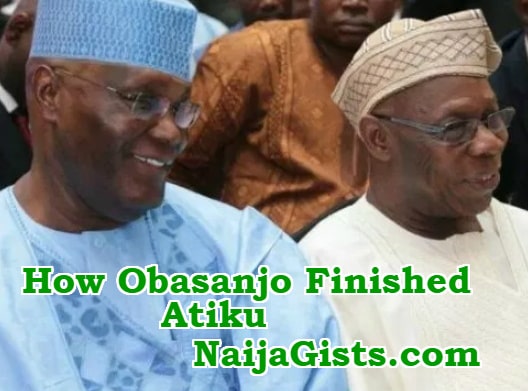 Politics is one interesting game in which one’s allegiance shifts along with one’s interests. Hence, it is said that in politics there are no permanent enemies only permanent interests. It is also in a similar vein that the great Benjamin Disraeli, Prime Minister of the United Kingdom in the 19th century, is quoted as having said, “Finality is not the language of politics”.

The one reason we must not talk like God is because we are not God. Our beloved former President Olusegun Obasanjo professes to be God-fearing, and it is his avowed love for the Christian faith that informed his decision to pursue a doctorate in religious studies. He was alleged to have said that God would not forgive him if he were to support Atiku Abubakar, his erstwhile deputy between 1999 and 2007, to become President of the Federal Republic of Nigeria.

In a most scurrilous assessment of Atiku, our erstwhile President has this to say:

“…What I did not know about Atiku which came out glaringly later was his parental background which was somewhat shadowy, his belief and reliance on marabouts, his lack of transparency, his trust in money to buy his way out on all issues and his readiness to sacrifice morality, integrity, propriety, truth and national interest for self and selfish interests…”

Just imagine a boss one had worked with writing what Obasanjo had written about Atiku on a former subordinate seeking employment elsewhere! Would it not have been a waste of precious time inviting such a person, even for an interview?

If all what Obasanjo wrote about Atiku were true, any knowledgeable individual would take them to be intrinsic to the essence of the subject. They are blemishes that can only be exorcised by means that are beyond the powers of ordinary human beings. A mere visit to Ota to seek the endorsement of Obasanjo and apologise for personal disagreements could not suddenly have erased blemishes that are traceable to a “shadowy” parental background-some kind of genetic attribute.

Those attributes of Atiku, presented as they were by Obasanjo, could not have made the former that great President the nation is now rooting for. In very sane societies, someone of that kind of character would have been quarantined in some kind of “political leper colony”. I know of societies where merely getting drunk or frolicking with a prostitute, even at a relatively young age, could mean some otherwise great political career is ruined forever.

Obasanjo, in now endorsing Atiku for President, could be said to be licking his own vomit. In what could be construed or misconstrued as an exaggeration of self-importance, Obasanjo has even promised that he would help in resolving issues, even if they were legal issues, that our “President-to-be” might be having with foreign nations. Indeed, there are no permanent enemies in politics only permanent interests. The fact that you may one day need someone to protect you from crimes you may have committed could be one reason why intemperate words should never be uttered or given a permanent berth in a book.

The 2019 presidential election should be quite interesting. With due respect to other candidates, this contest is between incumbent President Muhammadu Buhari of the All Progressives Congress and Alhaji Atiku Abubakar of the Peoples Democratic Party. Ours is a two-party state; being able to speak great grammar, or being in possession of a chain of degrees from some exotic universities, cannot be a substitute to being a candidate to a political party whose networks penetrate the various divides.

The election promises to be exciting, not least because of the fact that both Buhari and Atiku share the same identity. This will minimise the influence of religion and ethnicity in our electoral considerations. May the better candidate win!.

Continue Reading
You may also like...
Related Topics:Atiku, obasanjo, win