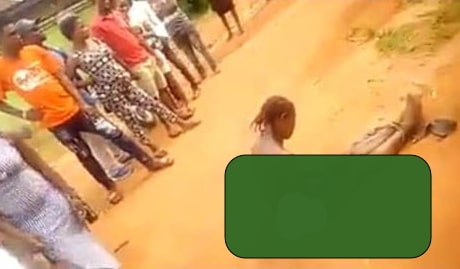 Police in Delta state have declared a prominent figure who ordered his boys to strip and beat up a lady who insulted him in Oka Delta wanted.

The politician who also doubles as Chief Priest from Owanta Delta state reportedly talked the lady pictured above into dating him and when she rejected his advances, he framed her up as a thief and ordered his boys to strip her naked.

Sadly, his victim was stripped, tied up and beaten at Owanta area of Ika LGA of Delta state.

The Delta State Police Command have launched a manhunt for the evil chief and his accomplishes.

Nigerians took to the social media today to condemn the increasing rate of stripping people naked most especially ladies.

This new video is coming a day after a slay Queen was stripped naked and tortured for allegedly stealing a cell phone in Benin city Edo state.