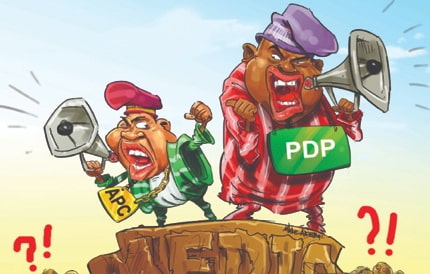 Nigerian Politicians And The Poor Masses: How They Consult Juju Priests For Power & Use Church Leaders To Confuse Christians

The battle is underway already. Every serious political contender is trying hard to convince the “poor” masses. First, they would consult the juju priest for some concoction then they would head to the churches to confuse the Christians.  They’d smile at their political correctness as spiritual leaders adjure their followers to support them.

But it’s a game. That’s what the politicians call it.  The masses are the puns; the politicians are the chess players. They move the common man at their whim and we fall in for their antics. Now they have planned us in their game. They will come with their sweet politically correct ideas, the type of things we want to hear. They tell us our situation is bound to change and they offer a few lucky and influential ones a few thousands to buy their conscience.

Our spiritual leaders are buying into the game too. They want to be seen at the center. They want to boast in their sermons that they prophesied that so and so will get the political seat. It is now a game of prophetic relevance for men who should be serving God not man. They think their words can sway our votes. It’s just a game.

The internet is already filled and overflowing with every politician trying to create an internet niche around their community. They hope Nigerians will find their way to the internet. The problem is that most won’t. Those online polls don’t get it. Elections won’t be won on the internet. Most of those who will vote don’t understand how the internet works especially if their constituency is a rural region.

They will come fooling Nigerians again and we don’t know the difference. The truth is, with the Nigerian spirit fully entrenched in the mindset of the average Nigerian, it is almost impossible to find a politically correct political officer who isn’t hoping to enrich his pockets. Nigerians just will have to vote anyway to the criminal politician who can hypnotize them the best.

Have you listened to a politician speak? You will be carried away by the vigourof and body swaying language. You’d hear the crowd cheer at what they really shouldn’t be cheering about. Sometimes I wonder if the crowd ever understands the silent messages been passed underneath those statements made.

Thank God for the few literate Nigerians. They are the ones making all the noise. They are the ones who seem to have all the records of the past events of our politicians. They bring it up at will over the media and at the major junctions of our cities. They argue about so and so and that and that. They keep a huge library of facts about this political leader and that political godfather. But then it doesn’t matter how much knowledge is available, those who will vote are those wholack knowledge of any facts.

It’s sad that people will vote party not candidate. They will be carried away by “the party at the center” or “our state has always been this party”. They will miss “credible” candidates from “unknown” parties, those who are thinking they can deliver something. Those who really want a seat know that they can find it only in the party that has the best facilities to hypnotize citizens.

Tell me how it is that citizens would still decide to vote for a candidate after they have seen that he has failed. They can glaringly see the sufferings under the leadership of the supposed candidate but are too blind to see a way out because their party must win. It’s not ordinary.

I know a few people will get cars and houses and more money, just to support their candidates. A handful will get the paltry ten thousand naira. Most will get nothing but will foolishly head to the polls misinformed about their candidate of choice and they will vote.

Nigerians need to be politically aware. Our political system has no working back door principle. If we don’t get it right, there is no referendum that can stop our politicians till their tenure is over. One failed attempt to install a “little bit” credible candidate will lead to four years of waiting for another savior.

They will come with vuvuzellas, drums, trumpets, umbrellas and brooms to get at us. They’d tell us they are working hard for our good. They’d show they are in vogue with the latest dance steps and finest musicians in the land. I bet you, people will sell their votes on the platter of a one night musical show. But I trust that you are one smart person who will pursue the better future of this country by what you do with your vote.

Please know the candidates and their track records. Don’t just vote parties, vote people, persons you are sure have what it takes to make this nation a better place.Please don’t be hypnotized.