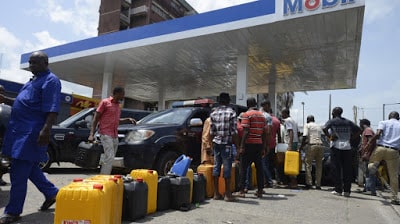 The Nigerian nightmare is back – fully. Just when Nigerians had thought that the daemon behind the fuel-marketers-induced crisis has slipped into oblivion, it staged a grand re-entry Sunday night with the same old pledge of making the yuletide season hell for Nigerians.

Fuel marketers, comprising the Major Oil Marketers Association of Nigeria, Depot and Petroleum Products Marketers Association and Independent Petroleum Products Importers, IPPI, according to reports have all resolved to lock up their depots nationwide in the coming week. The issue: subsidy debts owed by the government totaling N800 billion remains unpaid.

”The only way to salvage the situation is for government to pay the oil marketers the outstanding debts through cash option instead of promissory note being proposed”.

“The oil marketers”, he said, “have requested that Forex differential and interest component of government’s indebtedness to marketers be calculated up to December 2018 and be paid within next seven days from the date of the letter sent to the government.”

Say what you may of the notice which effectively translates to potentially shutting down an already traumatized economy, it says a lot about how little have changed that the staying power of the fuel cartel shows no signs of diminishing. Whereas the pathology that their stranglehold on the economy continues to present in different shapes and in their mutant complexities, they are almost in equal degrees, as lethal and opportunistic depending on time and space.

A sample is the current semantic dilemma over what to call the differential between the import price of petrol and the price at the pump, which yours truly wrote about on this page last week. For an equation so simple as not to require a secondary school credit pass let alone a degree in economics to understand, and one that economists and other die-hard practitioners of global trade and commerce would more appropriately recognize as plain subsidy, the federal government not only insists on living in denial, it opts to couch it elegantly as under-recovery, hoping ostensibly against hope that the hefty burden of the differential which, at the last count is said to have consumed a record $1.0billion from the NLNG dividend account, would somehow dissolve!

Now to the figure in contention – N800 billion – we must admit is a lot of money to owe more so in a sector which runs strictly on cash. Considering the sector’s absolute dependence on forex also makes it subject to the vagaries of exchange rate fluctuations, the marketers situation comes to a double whammy.

When all of these are added to usurious lending regime forced on them by the lenders, it takes little to imagine the burden being shouldered by the marketers in their daily striving to keep the pumps wet.

Today, whereas the story of the toxic assets on banks’ balance sheets are all too familiar and with it the now recurring but ineffectual tactic of ‘name and shame’ routinely unleashed on the so-called chronic and pathological debtors, the other half of the story,less talked about, is the equally humongous debts being owed by the government to this class of players.

Talk of the stresses and strains that the financial services sector has suffered in recent time;one wagers that the situation is no less contributory, but is also known to have sent many an otherwise thriving entities out of business!

Faced with a recalcitrant federal government, the marketers’ tactic of weaponizing the only effective instrument they have – choking off fuel supply at yuletide–if not entirely justifiable, might seem understandable. It’s an old trick mastered by martial artists to disable attackers by using a simple but forced push on a pressure point.

One course assumes that the debts actually exist or were truly deserving of payment. Or that the supposedly feuding parties actually agree on the limits of the liabilities and what constitutes the parameters. And so while we hear of nebulous concepts like “forex differential and interest component” being bandied around, what is hardly admitted is that their ‘co-efficient of elasticities’ are as high as the claimants make them to be!

It is a tough, opaque business – no doubt.

Which of course begs the question of whether the federal government would readily yield to the blackmail of accepting the patently one-sided –or if you like – open-ended determination of the liabilities – as it sometimes does, unfortunately;or whether the marketers on their part, stand any real chance of winning the argument let alone the war.

To begin with, few Nigerians actually believe the marketers tale.How can Nigerians forget the fraudulent claims for petrol subsidy made by 21 firms for which they were indicted by the Aigboje Aig-Imoukhuede-led Presidential Committee on the 2011 fuel subsidy scam. By the way, whatever happened to the N382 billion they were asked to refund which they wrongly collected as subsidy in 2011?

Moreover, if Nigerians find the penchant by the marketers to exploit the vulnerability of the people even when it means plunging the economy into ruin somewhat reprehensible, their experience in the hands of the unscrupulous players under every cycle of supply disruptions and which have come to mean more money than they could ever have made were things to be normal, obviously stands out as a class act in conscienceless profiteering!

To be sure, yours truly refers not just to the roadside peddlers of fuel for whom the shutdown of the depots promises a boom time, but the back channel marketing by the players guaranteed to deliver far beyond expectations, via the emergency ‘deregulation’ of product prices so created! Either way, they win – massive, while the rest of us, left at their mercies, are left to do what we do best – complain!

How did we get here? By this I mean the current situation in which a few economic actors will continue to hold the entire country hostage at every drop of a hat?

It is a question for which the nation has long found the answer but also unwilling to accept: we have left undone what should have been done aeons ago!

Whereas subsidy, for which the nation is inextricably caught in its web, and which currently consumes nearly 40 percent of our forex earnings is the price to pay for our myopic leadership, every other thing, including the current pretences about market forces meaning nothing; the believe that costs can somehow become irrelevant so long as there is a piggy bank available to service all manners of purposes under the sun, are merely derivatives.

Which is what makes latest fuel-marketers-induced crisis at best a reminder of that road not taken.

Is There Still Hope For Nigeria?
Nigerian Politicians Vs Poor Masses: How They Consult Juju Priests For Power & Use Church Leaders To Confuse Christians