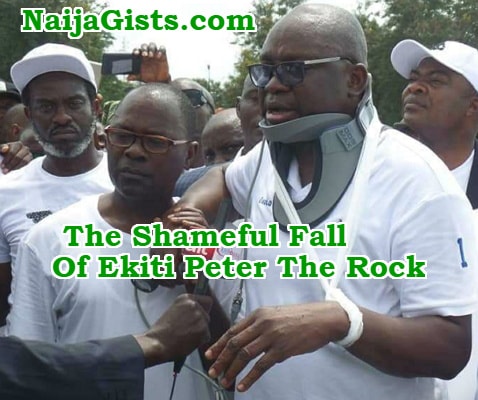 The Fall Of Peter The Rock: How Fayose’s Needless Dramatics And Loudmouthed Fulminations Became His Undoing

As a thespian, he would have made stellar headlines. His time in the sprawling Nollywood industry would have earned him not just megabucks but the popularity he so much cherishes though for which he seeks in the breach with his unending histrionics.

That he didn’t deem it fit to earn a name in Nollywood, Hollywood or Bollywood remains eerie. It must have been a great misstep judging by how he has turned governance and all its appurtenances into a theatre of the absurd.

After his haughty grandstanding, irascible rantings, puerile posturing and trailer-load of banal, long winding theatrics, ‘The Rock’ and governor of Ekiti State, Ayodele Peter Fayose has been defeated and deflated…his boasting punctured, his unrefined salvos at Abuja rendered otiose, his irreverent politics, hysterical pot-shots and crude populism sought through endless theatrical infantilism all came crashing like a carelessly arranged cards on July 14.

Fayose must be licking his political wounds. As it stands, he knows that the immunity that gave him the pedestal to make reckless remarks all over the place will cease by October, 16. He’ll become a former governor again. His platoon of aides gone. No more stops at local “bukas” to eat. Ekiti citizens will no longer bear with startling equanimity, a serious business of governance turned into a huge joke by a jester governor who also desires the nation’s top chair.

This is not a matter of party A or B. Fact is, viewed dispassionately from any prism, Fayose and his ilk aren’t the kind of politicians we need if we must move from point one to two. Don’t tell me he’s brave. Not that all about him is negative though, but he has wittingly or unwittingly identified himself more with negative headlines than positive commentaries. Not once has he lampooned President Buhari with so much vile and scant disregard.

In the days leading to the Ekiti poll, Fayose postured as the main man. He dwarfed Kolapo Olusola the candidate of his party who in height is already close to the ground. Eleka, a professor had no latitude to sell himself to the electorate. Fayose was the arrowhead of sorts while Eleka was presented as a smokescreen brought to elongate the cantankerous tenure of Fayose. In a way, if Eleka, a more urbane fellow had kept his godfather, Fayose at bay, perhaps, he would have won the poll taking into cognizance the narrow gap with which Fayemi triumphed.

So, voters were confused. They didn’t see Eleka but Fayose. Many felt a vote for Eleka equalled a vote for Fayose hence they, perhaps, in protest, went for the more debonair Kayode Fayemi.

Fayose’s antics, tactics and rantings prior to the polls were well over-the-top. In brazen disdain, we saw him rebuff an invite to welcome President Buhari to Ekiti. He withdrew transporters from the road to cause difficulty for those who may have wanted to join the APC mega rally. Fayose asked shop owners to close shop same day.

In an interview on Channels TV before the poll, he was at his brassy best. Said The Rock: “I’m telling you again, if APC, if they are mad in the head, their madness will not enter Ekiti o. I heard what they are doing; I’m watching them like a bat. I’m like a bat…I’m a politician of note. You see, yesterday, I was frying garri with some women. Let them go and meet people now. This oyibo (English) they are speaking all around will never do anything. I don’t have time for them. July 14 is almost here. Let them bring INEC behind them, bring Chief of Army Staff; I’ve heard all their planning, you understand. But when you carry fire, the moment it comes in contact with water, that fire will die.”

While opinions may differ, the fact is that Fayose bungled the whole process. His needless dramatics, not to say his loudmouthed fulminations, became his undoing. His posture lacked tact; his speech, undiplomatic, villainous, his comportment, unbecoming of a governor.

We know he plays politics from the stable of local content. We’ve seen it when he stopped at the market to eat rice at a rickety bar. He has assisted women fry garri (cassava flakes). He has hosted hunters in the heady days of herdsmen onslaught in Ekiti clad in military camouflage. We have seen him as a pastor, meat, fish seller, he has mounted motorcycle and, like an outrider, led a platoon of okada riders in a town rally, singing and chanting, he has roasted boli (plantain) on the streets. He has been a tailor. Returning Officer. Everything!

But he took all that to a whole new level when teargas canisters was reportedly let off by the police when dismissing a rally of his party. Quite curiously but strange, of all those there, the teargas affected only Fayose. Always in for drama, the governor tumbled and fell down. He broke everything from the ‘huge impact’ of what some described as a ‘customised teargas’. His neck, his hand, his body, his leg, and every other part you can think of surrendered to the power of teargas.

Just as he wanted, an army of sympathisers milled around him. Sitting on the ground whining and writhing in imaginary pains, his aides who for a moment turned emergency doctors made frantic efforts to comfort and console their fallen governor. He was said to have been rushed to State House Clinic anon. Many thought the ‘teargas of destruction’ won’t allow him vote the next day owing to its ‘devastating impact’ on Fayose who, it seems, is ultra-allergic to teargas.

We were all wrong. While many were still discussing what had befallen the governor, he emerged from the hospital and addressed the press tearfully. An arm sling connected to a neck brace that looked like a hatchet job done by a witchdoctor and not a medical doctor, Fayose Ayodele Peter “The Rock” accused the Assistant Inspector General and the Inspector General of Police of plans to kill him.

It is the same Fayose who prior to the poll said: “my name is Peter, I am The Rock. If you collide with me, you’ll break, if I collide with you, you’ll be destroyed!”

All said, truth is that the character and personality of a politician should be placed above the acceptability or viability of the party he represents. No party should allow a disruptive, knockabout character smear the image of their fold and dampen its chances in any election.

The narrative of politics must change here. It shouldn’t be if you “jam me, I jam you”. We should leave personalities and discuss issues. The Ekiti poll was short on issues and long on verbal fisticuffs. This isn’t the way to go.

For Fayose, one hopes he learns some lessons from this debacle, even though one doubts he will. Having failed to install his choice as successor, will he now reprioritise and refocus attention on his presidential bid?

Continue Reading
You may also like...
Related Topics:ekiti, fayose, peter the rock

Nigerian Politics Now In The Grip Of Self Serving Political Nomads With No Vision Or Sense Of Direction
Pastor Leke Adeboye And His Many Controversies: What Are The Elders Doing To Help Me