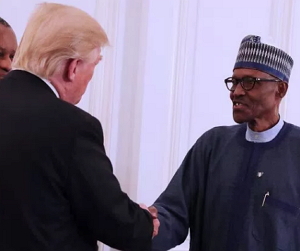 US has revealed that President Buhari would be the first African president to meet U.S. President Donald Trump.

Here is what a Senior US government official said during a background briefing at the U.S. Consul General’s Residence in Ikoyi, Lagos on Sunday.

“We are excited about the planned visit by President Buhari as the first African leader to be engaged by President Donald Trump at the White House.

“The most important is that it is in Washington. It will be a very high level meeting; it will help the U.S. to also understand Nigeria’s projection.”

“There will be independent conversation on security, governance, the Lake Chad Basin and Nigeria’s role as a democratic leader in the region’’ .

US To Deliver 12 Fighter Jets, Bombs & Rockets Nigeria Paid Over $400Million For In 2020
Nigerian Burnt Alive By South Africans In Rustenburg Over His Accent As Police Officers Ignored His Cry