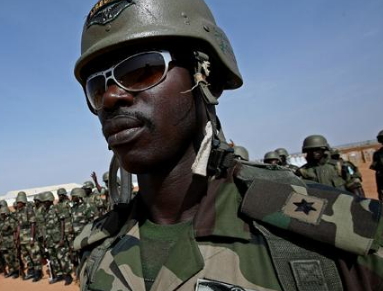 In his ruling in Maiduguri on Tuesday, the President of the court, Brig.-Gen. Olusegun Adeniyi, said the convict would also be demoted to private as part of his punishment.

“Staff Sgt. Umar Sale, you have been found guilty of the charges against you, having listened to the presentation of the prosecution to treat you as a first offender.’’

“The court hereby sentences you as follows; on count one, three years imprisonment, on count two, demotion to a private.
“The sentence is however, subject to confirmation by the authority as provided by sections 141 (2) and 152 (1a) of the Armed Forces Act cap a 20 laws of the Federal Republic of Nigeria 2004,’’ he said.

Umar was alleged to have tied up a teenager, Muhammad Sale on an electronic pole for several hours causing him to lose one of his hands.

The young boy was accused of stealing money belonging to the soldier.