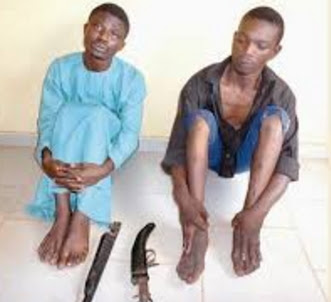 The suspected robbers, Akeem Dauda and Mojeed Yusuf, reportedly tied their victim’s hands and gagged him, while the robbery lasted on Sunday.

The cleric’s Toyota Camry with number plate, EKY 483 DE, was also stolen by the robbers.

Oyeyemi,an Assistant Superintendent of Police, said, “Our men at Obada Oko got information that some people wanted to sell a car suspected to have been stolen.

“Policemen went there and the two robbers were arrested, while the stolen car was recovered.”

The robbers confessed to the crime.

Photos: Pastor Caught With Skeleton Of Sister In Ogun Says Dead Sister’s Spirit To Return
Nigerian Soldier Who Tied Boy To An Electric Pole In Maiduguri Jailed For 3 Years