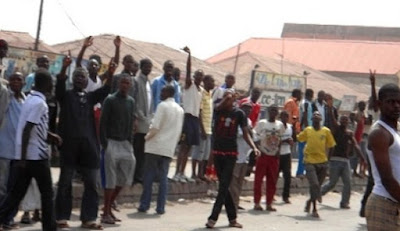 As a way of avenging the death of one of their own, some youths from Tsafe LGA of Zamfara state today staged a violent protest and burn down a police station in the area.

According to an eyewitness who requested not to be named, a man identified as Ibrahim Muhammad who hails from a village in the area was accused of stealing a phone.

He was subsequently arrested and tortured to death at Magazu Police Station in Tsafe LGA of the state.

His death reportedly angered the youths of the village who went on rampage and set the station ablaze.

This sad incident has been confirmed by Zamfara Police Spokesperson, DSP Shehu Muhammad.