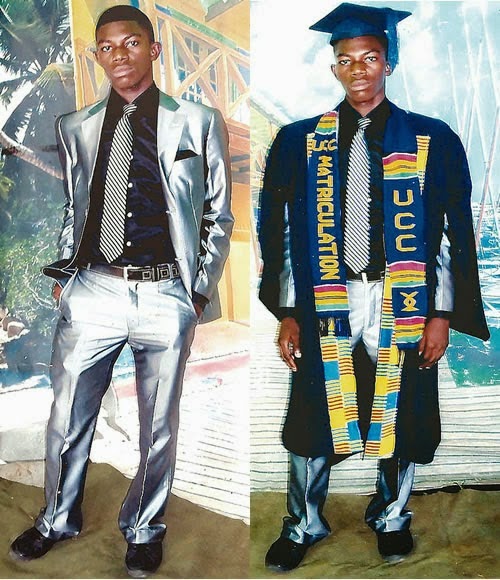 Do you guys remember the story of a Nigerian undergraduate who was killed recently by an unknown person in Ghana, if you missed it, read it here.

The real name of the deceased is Godwin Awogbo, the deceased’s father recently talked to Tribune on why his son was murdered.

Mr Fred Awogbo who said he regret ever sending his son to study in Ghana accused his roommate of killing him over $4500 he (the deceased) lend him.

The bereaved father revealed that his son’s room-mate borrowed $4500 from him and killed him when he asked for the money..

“We arrived at the Nigerian High Commission and with some of the staff of the High Commission, we went to meet the Vice Chancellor. The meeting was also witnessed by the Police and all Nigerian community leaders in Ghana.At the meeting, the management asked some of his friends and roommate to say what they knew about his death. Meanwhile, while I was in Nigeria, I spoke with his roommate, a Ghanaian, who told me that my son had withdrawn some thousands of dollars meant for his school fees, but had lent the money to some students. When he requested them to pay back, they started threatening his life. It was after the threats that he heard about his death.

“Unfortunately, after everyone of them had spoken, not even the roommate mentioned the issue of those my son lent some money and how they threatened him.  So, I told the school authority and the police right there to ask him to tell them how my son was threatened. It was when he started talking that we realised he (the room mate) was the one who borrowed about $4,500 from my son, thereby denying my son the opportunity of paying his school fees on time. When my late son started worrying him, he set him up. So, after the police took my statement, they promised to arrest him.”“My son was brought up in the church. When he was still in secondary school, he was being addressed as ‘Dr Pastor’ because he was active in church”. Appreciating the efforts of the Nigerian High Commission, Mr Awogbo said “The Nigeria High Commission in Ghana really surprised us with the amount of effort they have put into this case. They have promised to make sure the killer is brought to book.

Honestly, I regret sending my child to study in Ghana, because if he had gained admission into higher institution in Nigeria, this would not have happened. The reason I sent him to Ghana was to avoid the issue of strike action in Nigerian higher institutions. Even his mother and proprietor wanted him to go to Canada to further his studies. They really persuaded me but I said ‘No’, because I didn’t want to lose my boy.

I have been traveling to Europe for more than 20 years and I know what happens in such developed countries. At a tender age, I thought if I sent him there, I might lose him; he might not even want to come back home.So I decided that after he’s through with his degree, he would go and do his Masters in Canada, but here we are.As for now, I cannot advise any Nigerian parent to send their children to study in Ghana; a lot of them studying here are teenagers and the stress is too much for them. Coming here myself has made me know that, in addition is the fact that the money we are paying is too much, compared to what private universities are charging in Nigeria.”

OMG I feel for this man…. The memory of his late son will forever stay with him.