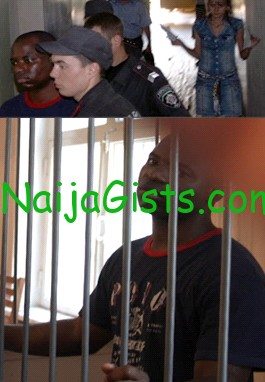 Olaolu Sunkanmi Femi, a Nigerian student in Ukraine is currently facing life imprisonment for attempted murder after he acted in self defence when one of his friends and himself were brutally attacked by four young Ukrainian men at the entrance of his apartment. naijagists.com

The alleged racists attacked the two men, pulled them to the ground and hurled racists slurs on them.

An eye witness of the incident said Sunkanmi defends himself against the attacker when he managed to get up and attack them with a glass from a broken bottle.

“It was while he was defending himself that police arrived at the scene and the Nigerian was subsequently arrested and charged with attempted murder of five people” a Nigerian embassy staff said who has knowledge of the case told African Outlook, adding that the victim thus became an accused in a case which has become a celebrated case in Ukraine.

As at the time of this report, Olasunkanmi has been remanded in an Ukrainian prison because the police refused to take the case to court citing unavailability of the police to get an interpreter for him.

But the Nigerian students’ community in Ukraine under the leadership of Osarumen David-Izevbokun, a Phd student in international relations has been working tirelessly to ensure justice for the Nigerian by organizing protests as well as drawing the attentions of the human right groups in Ukraine to the plight of Olasunkanmi who has spent almost seven months in jail without trial.

David-Izevbokun told African Outlook that he alongside other Nigerian students in conjunctions with some members of the Ukrainian human right groups staged a protest on April, 9 outside the Leninsky District Court in Luhanski demanding the release of Olasunkanmi.

The actions, according to David-Izevbokun has put the Ukraine police on the spot as the case came up for hearing on May 3. “We had a lot of media coverage on the protest ” David-Izevbokun said, noting that he was sure the attention given the case may have prompted the May 3 court appearance of the suspect.

David-Izevbokun who was at the May 3, court hearing told African Outlook that Olasunkanmi appeared depressed when he showed up in court.

Many other Nigerian students spoken to by African Outlook however raised concern about the competence of the female lawyer: Ludmila Havrysh handling Olasunkanmi’s case.

The Ukrainian lawyer was reported to have told protesters that her client has not been able to read the file material since it is all written in Ukrainian or Russian which he doesn’t understand and that was why her client had remained in jail.

“We heard she wanted to be paid $10,000 when she had not even been able to secure bail for her client who has been in detention for more than six months” an irate Nigerian told African Outlook wondering whether the lawyer was capable of defending Olasunkanmi.

Another source also told African Outlook that one of the attackers’s family who has a connection with the Ukrainian police may have been the reason why the Nigerian student was being detained without trial.

“They went to the hospital and documents were secured for infliction of wounds. I learnt that one of the supposed victim (Ukrainian) has a police relative or parent, and so vowed to deal ruthlessly with Olasunkanmi” a Nigerian student quoted one narrator as saying while lamenting that the Nigerian embassy’s representative came to visit Olasunkanmi in jail once but did not return again after the first visit.

But an embassy spokesperson who pleaded anonymity (because he is not authorized to comment on the case) told African Outlook that the Nigerian consulate had not abandoned the Nigerian to his fate “We are in torch with the Ukrainian authority and we have been doing everything to ensure the boy is released unconditionally using diplomatic channel” he said, adding that the Olasunkanmi was being charged for attempted murder, an offense which under Ukrainian law is not bailable.

“There are ways in which we handle cases like this so that we would not appear to be hostile or criticizing our host countries’ laws” the embassy staff said while assuring that he was confident Olasunkanmi would be released soon.

When asked if the embassy has been able to secure the service of an attorney for the Nigerian student, the embassy staff said: “It is not within our mandate to pay for attorney’s fees for any Nigerian in distress, you may check this out with other Nigerian embassies abroad, but we have been working with the Nigerian community leaders here to ensure that we do everything within our means to help Olasunkanmi in time of his need” the staff added hinting that the representative of the embassy was at the May 3 hearing.

Another 28-year-old Nigerian student of Kharkiv National Radio Electronic University is in intensive care unit with knife injuries to his neck following an attack on him by people believed to be racists.

Another 19-year-old Nigerian student from the Poltava Agrarian Academy is also lying critically ill in the Ukrainian hospital following knife injury inflicted on him by yet to be identified persons.

The two Nigerian students were attacked late in the evenings by assailants who fled the scene immediately after the attacks.

The Kharkiv Regional Prosecutor’s Office in Ukraine are treating both cases as attempted murder motivated by racial intolerance.

Speaking on the two recent attacks, the Nigerian embassy said they were yet to be briefed on the case.

Cases of attack on African student in foreign land is increasing becoming popular. Guess African needs to celebrate their country and stop fleeing to foreign land to study. (I may be wrong but that is my take on it)