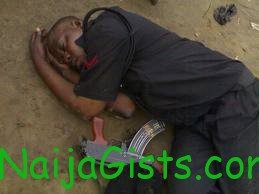 A Police officer identified as Corporal Anthony Ugwuoke on Sunday Aug 19 commits suicide after he brutally shot his wife, Nkechi Ugwuoke and their two daughters. naijagists.com

This happened at Edda Village, Ugwuachara in Ebonyi state, Nigeria.

The late police officer was an orderly to a Ebonyi High Court judge.

Mr Sylvester Igbo, Police Public Relations Officer in the state, confirmed the incident but added that no clue had been established on the motive for the action.

“Investigations into the matter are on-going as we would ensure we get to its root.

“The body of the late officer has, however, been deposited at FETHA mortuary,” Mr Sylvester Igbo, Ebonyi state Police Public Relations Officer.

The leader of the community where the suicide happened expressed sadness over the incident and has called to the Ebonyi police to unravel the mystery surrounding such action.