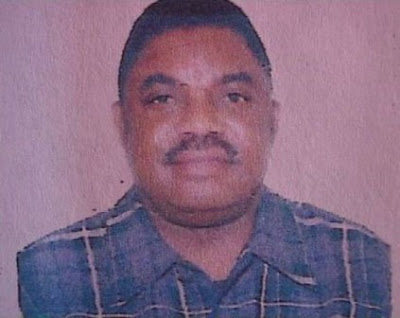 The 57-year-old family man met his untimely death in the hand of 2 of his passengers in the wee hours of Tuesday June 3rd, 2013 in Washington, DC.

According to police investigations, the two men who allegedly robbed the taxi driver while riding his cab took to their feet after killing him.

The murder happened around 3:15 am on Tuesday morning. It was reported that the cab driver was shot before his taxi crashed into a parking meter near Ontario and Kalorama Roads.

The robbers in an attempt to rob him shot him in the shoulder causing him to lose control of the taxi.

Solomon Okoroh’s killers were later caught in a serious gunfire with the police who chased them on foot.

The deceased, a devout deacon leaves behind a wife and 5 children.

Before his untimely death on Tuesday, he worked as a Taxi driver for 15 years at Classic cab.

“I tell you, all cab drivers are scared for this to happen, because say for $10 or $15 fee, it is not justified to die,” said Chamroeum Muy at Classic Cab.

Those who knew Okoroh said he had been warned about the dangers, but wasn’t one to discriminate.

“This is very terrible because he is one of the few guys that will not pass anybody. He stops for everyone, he stops for anyone,” said Evelyn Ruiz.

She last saw him Saturday when he came by Classic Cab to pick up his insurance card as he did every week.