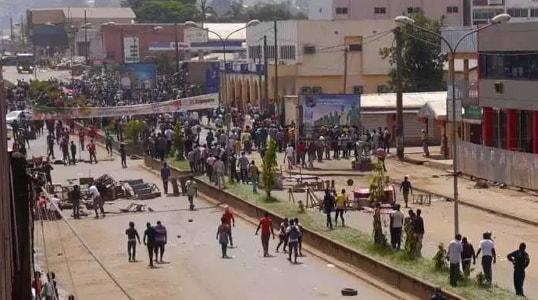 What started as a modest industrial strike action by English-speaking lawyers and teachers against the imposition of French in Cameroon, has spiralled into an unprecedented internal armed conflict, driving away Nigerian traders who have traditionally managed key markets in towns around the regions.

The report by Quartz Africa alleged that there are fears the country could slide into civil war, as the conflict persists. It was also gathered that in recent months, frequent clashes between government forces and separatists seeking to establish a state they would call ‘Ambazonia’, left scores of civilians dead, including women and children.

Activists who are all out to express their dissent, instituted a civil disobedience action called “ghost town”; which grounds daily activities every Monday, with extensions to some other key days, following the recurrent deadly confrontations which has provoked mass movement of people and relocation of Nigerian traders.

No fewer than 160,000 people have been internally displaced, while a further over 21,000 have crossed to next door Nigeria as refugees according to the UN Office for the Coordination of Humanitarian Affairs.

Traders who spoke to Quartz see the operation as economically damaging, as at least one full business day is lost each week since late 2016. Those who dare defy the order risk facing the wrath of unknown arsonists who have burned down shops in nearby towns.

Restrictions of the movement of people and goods have further worsened the already deteriorating situation for businessmen. Armed secessionists called “Amba Boys” mount intermittent road blocks on-and-off along major highways in the troubled area. The government has also had to officially close its western borders with Nigeria on at least two occasions, while dusk to dawn curfews instituted by some local administrative authorities have simply helped to worsen the precarious situation.

NAN reported that the conflict has also been marked by the disruption of essential utility services, especially the supply of electricity and network interruptions to telecommunication services. Internet services were cut off for 136 days between October 2017 and February this year.