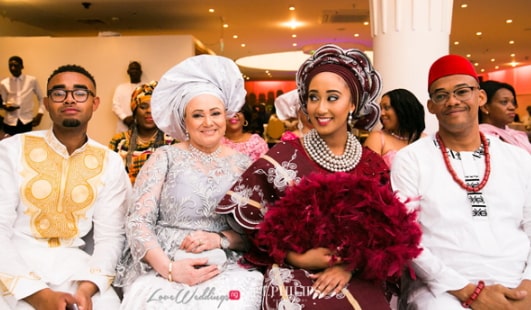 Nigerian Wedding Traditions And Customs: What To Expect At A Nigerian Church Wedding, Traditional Wedding & Reception

Nigerians are very sociable people which is why events such as child dedications, launching(of every kind), burials and of course weddings always attract a lot of attention. A Nigerian may be complaining of not having money but when it is time for an event, especially one that concerns him/her personally, you will be surprised at where the money will come out from.

Is it therefore any surprise that westerners may have a wedding ceremony and have just about five to thirty guests while a Nigerian will have a wedding and his whole village with that of his wife will be in attendance? That is the extent Nigerians can and will go once it has to do with weddings.

Before a wedding is done in Nigeria, several factors are put into consideration (especially the traditional weddings) such as the man/woman’s tribe, backgrounds, family history and ties etc. With over 250 ethnic groups in Nigeria, there is no doubt that Nigeria is culturally rich and diverse.

With this, you can be sure that some customs and traditions are bound to appear when it is time to tie the nuptial knots traditionally.

We are going to take a cursory look at some of Nigerian traditional wedding customs from some selected tribes. Some are already rustic and giving way to modern times while some seem like they have come to stay.

Here are some of them below:

The Tradition Of Prostrating Among The Yorubas

Of all the tribes in Nigeria, Yorubas have to be the ones with the highest regard for respect. It is not like other tribes do not value respect but when it comes to them, they go a notch higher. You can literally be hanged for not respecting the elders. 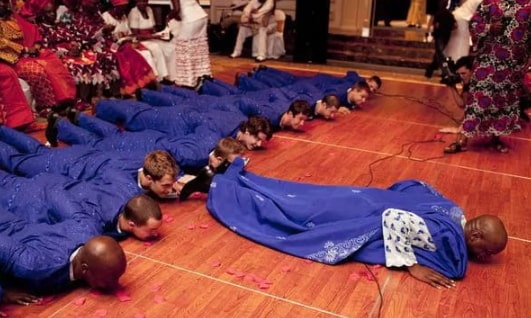 During the wedding, the groom and all his entourage will be mandated to lie down and prostrate before the family of the bride. It does not matter how expensive the agbada is, they must prostrate on the floor. The friends all lie on the line while the groom moves further in front and lies in front of them. This is clearly to demarcate the groom from the rest.

The Bride Price Custom Among The Igbos

Now it is not just the Igbos that collect bride prices but when it comes to theirs, it goes way higher than what other tribes do plus the amount of attention accorded it.

Other tribes have realized that marrying an Igbo lady is not for the faint-hearted. It is usually a case of of how deep and heavy your pocket is. Especially in a particular state in the east, the bride price is so incredibly high that a lot of men have had to not marry the love of their lives because of the exorbitant fees. 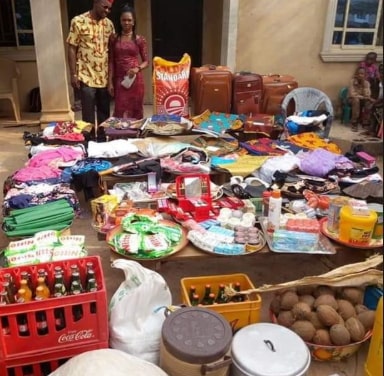 The truth is that it does not just end there. Aside form the bride price proper (which involves a lumpy sum of cash and some choice gifts), the groom is still presented with a list of gift items which he is expected to provide in full to the family of the bride otherwise the marriage will most likely not hold.

Also, the more educated and successful the bride is, the more expensive the bride price and gift items become. The idea is that the lady is a treasure and cannot just go off in marriage just like that after all the amount of money and time that was spent on her.

The sharp tradition of the Fulanis

Fulanis are a nomadic tribe famed for their courage, discipline and spartan life style. So in what is dubbed a “show of bravery”, the groom is whipped publicly in the full glare of all present. There is no particular number of strokes.

Regardless of the number, the groom is not expected to wince, talk more of cry during the whole process of the flogging. This will show his bravery and resilience with regards the marriage. If he is not able to endure the cane and cries out or wriggles in pain, the marriage, is considered over before it even started.

This tradition is more or less a test of strength for the groom. Before the big day, some of the grooms even practise to test their readiness.

The Yoruba custom of carrying the bride

This tradition is actually on a lighter mood. So after they have declared man and wife, the husband is expected to lift his wife and carry her around doe some time. The aim is to show that he is capable of supporting and caring for her throughout the duration of the married life. 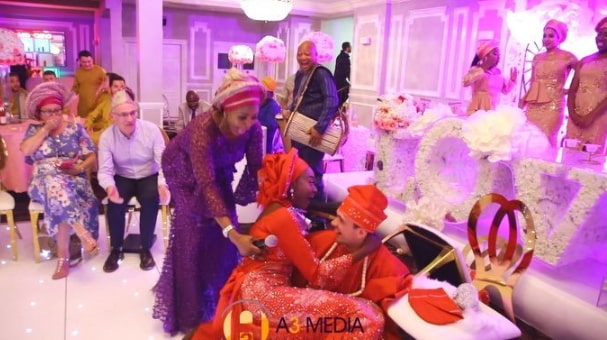 The Virginity test among the Yorubas

This is yet another tradition among the Yorubas. In some years back, after the wedding has been concluded, the family of the groom stand outside the door of the bedroom of the couple waiting.

The groom is expected to come outside after sometime with a white sheet soaked with soaked with blood signifying the chastity of his wife. This is usually a cause for celebration especially in the bride’s family. It shows that the girl was properly raised and did not  play the whore in her father’s house.

When it is confirmed that the bride is a virgin, the groom is expected to send gifts to her family. If she is not a virgin, a half boiled yam is sent to her family. She will live with the shame for the rest of her life.

The “stern face” custom of the Ijaws

It is the custom of the Ijaws that the bride should keep a stern face on during the wedding ceremony until the groom has sprayed her plenty money. It is oy when she feels saturated with the notes that she can then crack a smile. Usually, the groom comes with plenty of money and continues spraying until she smiles. If she does not smoke, that wedding is seen as not being complete.

In times past, when it is time for the marriage, the from is presented with three women each with her fave covered. He is then expected to pick whom his real wife is. If he does not get her right, it is interpreted to mean that the marriage be annulled since he is expected to tell his wife apart from the crowd if need be.

Another custom the  Igbos have is the ‘mock search’. This is done by the bride after the guests have been seated, and she has come to greet her guests and future in-laws.

Shortly after she is called to come collect a cup of wine from her father or an elderly relative in order to show whom her husband is. After receiving the cup of wine, she goes around looking for her husband. Some other young men seated reach out for the cup saying “it is me or look at me here”. After doing this for few minutes, she finally goes to her husband’s canopy, kneels before him and offers him the drink.

He drinks it, puts some money in the cup and walks hand in hand with his wife to her father and then kneels for his paternal blessings. It is worthy to note that however that some of these cultures have withered off with time while some are still being practiced judiciously.

What To Expect At A Typical Nigerian Wedding

Some of the things to expect in a typical Nigerian white wedding and reception include:

Nigerians are very popular for having so many outfits during the wedding so do not be surprised when you see two or three outfit changes.

Couples who have both weddings on the same day are usually the ones who do this a lot. Most times, the cloth the bride wears when making her first appearance is not what she will be wearing by the end of the marriage.

Also when it is time for the reception, there is an equally different outfit for that. And as we all know, Nigerians are avid lovers of colour and style so you can be sure the make up and accessories will be anything but subtle.

Food and lots of it

If you have attended a Nigerian wedding, you will agree with me that there is usually more than enough to eat. Nigerians are very particular about foods and that is why adequate care is being put when looking for catered and even planners. 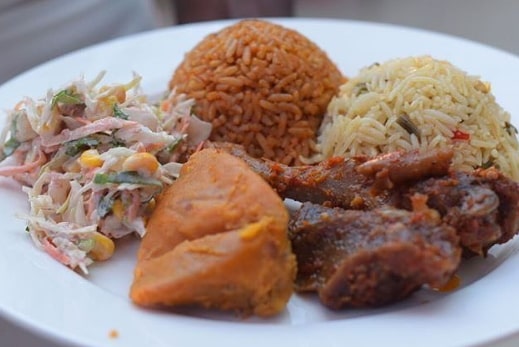 Some of the foods you can be sure to see include “swallow” such as eba, pounded yam, fufu, semovita etc with assorted soups (the soups usually depend on the tribe having the wedding and where it is taking place, rice (fried, jollof, plain white, coconut) eaten with a variety of stews such as chicken stew, beef stew, ofada, banga etc. 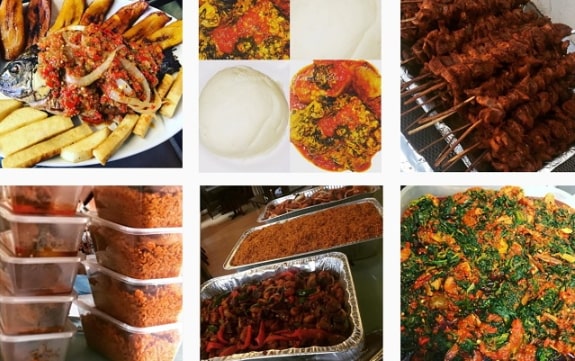 A lot of people even go as far as having some inter continental dishes added to the menu. Let us also not forget additions such as salads, moi moi, plantains etc. 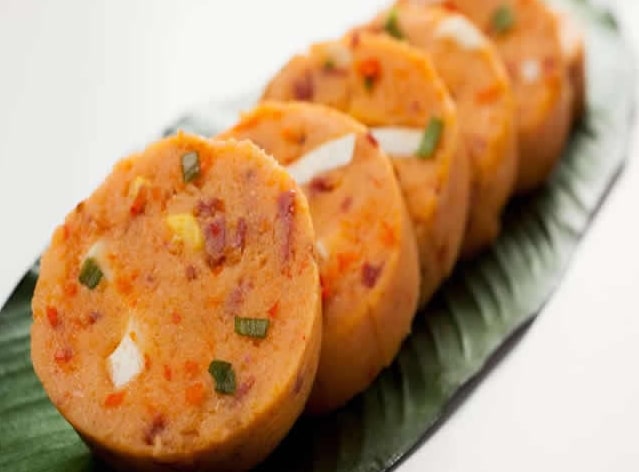 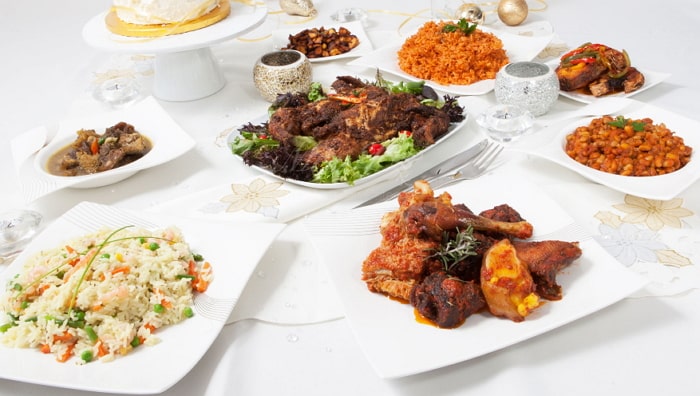 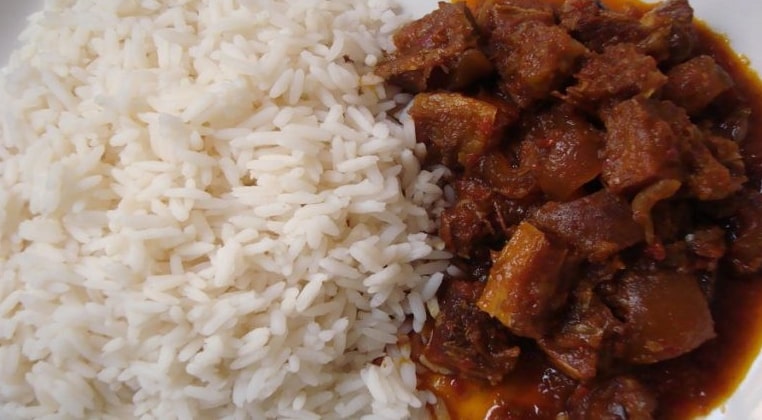 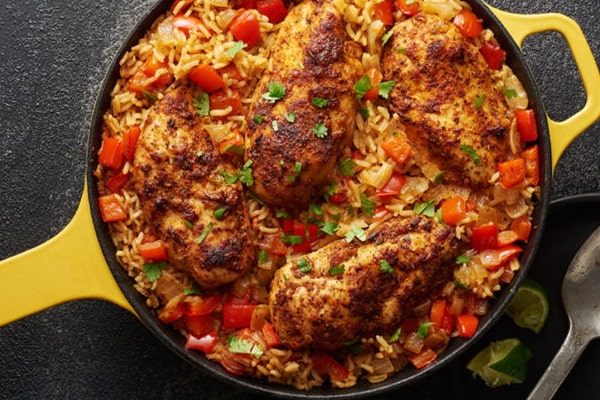 Recently, Nigerians have also started including what we call “small chops” in the menu. This usually include suya, kilishi, puff puff, chocolates and candies, assorted nuts (groundnuts, peanuts, cashew nuts) chin chin, meat pie, queen cakes etc. The food list is almost endless as some even include pepper soups and salads. 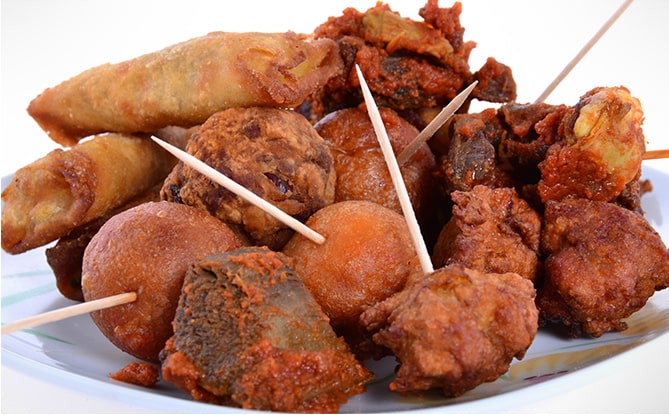 This is usually the spice of the event. It is impossible for a wedding to be complete without asoebi. This is a uniformed outfit worn by family members and friends to show solidarity for the celebrants.

Usually before the wedding, the bride chooses the asoebi outfits for her big day. All the groups interested can noe buy and sew according to their preferences. Some others such as the dignitaries and some rich family members and friends get it as gifts because the bride knows she will get lots of gifts items from them on the wedding day.

Nigerians are lovers of food music and what better day to show it than in the wedding day. Usually a DJ is called (some even hire a VJ) to match the sound with pictures. These days the  artist whose songs seem to have become a wedding chant is Flavour. Most of his songs are played during traditional weddings and in receptions. Other songs you will hear will come from the likes of Tiwa Savage, P square, Banky etc.

Sometimes during the reception, there is a couple game where they sit with their back to each other and answer questions from the MC. They are usually very funny and sometimes a bit intimate. The couple hold one of the each other’s shoe. So when a question so asked, the shoe is raised to show who it refers to.

For instance, if the man raises his wife’s heels, it means she is the answer to the question and vice versa.

Despite all attempts by the federal government to to avoid abusing the Naira by spraying, it is still a common feature of most Nigerian weddings. Most times it becomes like a competition between the groom and his friends to see who will spray the bride more money.

Spraying money is used to show affluence and does not seem like it will leave the scene anytime soon.

Another feature is the guest list. Most wedding planners double the estimates number of expected guests just to ensure a hitch free event.

Ghanaians Slam Actor For Marrying Wife With Down Syndrome, Call Her A Cursed Woman
Dr. Adewale Oloyede Is Dead: Retired NPS DCG Killed In Kogi While Heading To Lagos