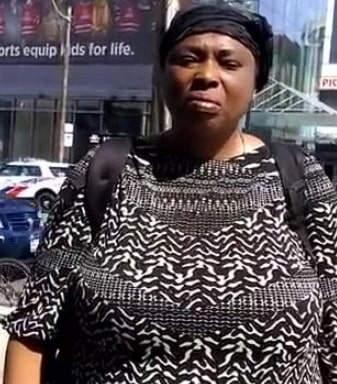 Check out the viral video of a Nigerian-woman based in Toronto who was insanely dragged by a self professed American man recently.

The woman said she’s a graduate of York University in North York Canada who resorted to begging for money in order to pay her rent and take care of her son.

In the 2 minute long video, Osagie was asked why she left Africa to become beggar in Canada, her response was that the government of Nigeria is not running the country well so she relocated to Canada to have a good life.

She added that Nigeria’s economy is unstable and that the country’s leaders are very corrupt.

At the end of the video, the American man insulted the Nigerian street beggar and told her not to call him her brother.

So what happened to all the hardworking Nigerians in Toronto, why aren’t they all begging for money on the streets. 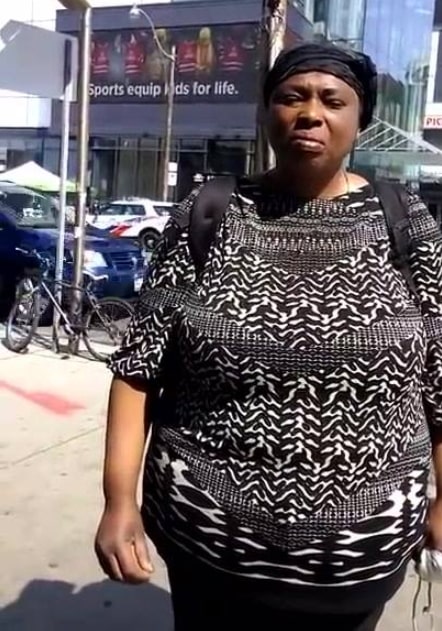 From the way he’s speaking, one can see that he’s a Caribbean man because that accent is not that of a typical American man.

What does it take for him to counsel the woman instead of putting her on camera to proof a point about Africans migrating to North America.

Why did Mr interviewer left his base in the Caribbean for Canada. #mumu #man #Ode osi.

His point in the video.

The Nigerian woman was trying to scam people for money by trying to become a professional pan handler.

This is the negative side effect of weed legalization in Canada.

A fan of NG said most Americans are now finding solace in Canada because of marijuana legalization.

What if the Nigerian woman in the above video is battling mental health issues.

A Nigerian woman in her right mind will never beg for money on the streets like this woman was caught doing.

She is likely a mental health patient in dare need of help.

Her village “winch winch” people seem to have followed her to Canada.  God have mercy!!.