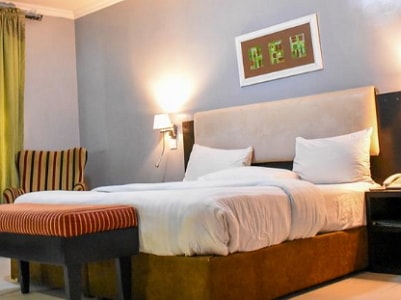 A young Nigerian woman has been arrested in connection with the alleged murder of her South African lover.

The suspect, 26-year-old Gift Mike was over the weekend picked up for the murder of 50-year-old Daniel Grant at Emerald Cove Hotel in Victoria Island  Lagos on Saturday the 5th of May 2018.

According to police investigation, the deceased and his girlfriend checked into the hotel around 7pm and later went out for a drink before retiring into the hotel.

Sadly, the lifeless body of the deceased was found hanging from the ceiling the next day.

Police revealed that the suspect who later framed up suicide story had earlier called a friend of the deceased, an Indian expatriate named Piyush Pirasata to inform him that she woke up in the middle of the night to find her boyfriend dead.

The suspect later attached the body of the deceased to the ceiling fan with the help of an undisclosed accomplice in order to clear her self from the alleged murder.

Here is what Lagos Police CP, Edgal Imohimi said about the suspect today:

On arrival at the murder scene, the team of detectives found out that the death of the South African might have been stage-managed.

On the spot investigation showed that though the deceased was found to be hanging from the ceiling, his legs were still on the floor, raising suspicions. The belt he was supposed to have committed suicide with was still tied round his neck.

The suspect is currently in police custody.