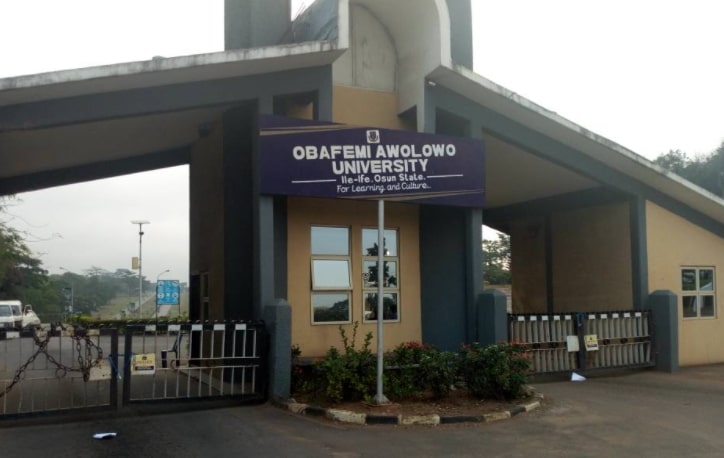 A worker at Obafemi Awolowo University, Ile-Ife, Osun State, named Fisayo Oyeniyi, hung himself in his residence after sending suicide text to his mother, wife and children

According to report, Oyeniyi who was one of the armed guards in the security department left his working place for his house around Kanmi bus stop, at Ifewara road, Ile-Ife to commit suicide on Thursday the 25th of March 2021.

Oyeniyi sent text messages to his mother, wife and his two children informing them that he was not interested in living again.

A source in the area named Tolani, said, “the incident happened around noon. I saw people rushing to his apartment to get to see for themselves to be sure of what Mr. Oyeniyi has done to himself.

We saw where he hung himself, dangling on the rope inside. He has been buried. This is so sad.”

Another source said, he committed suicide after two hours that he sent the suicide text to his family.

Friends and colleagues have taken to social media to mourn social influencer simply identified as Tunde, who allegedly committed suicide less than 24 hours after posting that he was in dire need of financial help. This happened on Tuesday the 9th of March 2021

He was reported to have battled depression due to lack of money before taking his life.

The Nation also learnt the popular Twitter influencer had lost an old account of over one million followers last year before rejoining the platform in September 2020.

Tunde, simply known as Tuneri on the micro-blogging platform, pleaded for financial help on Tuesday.

In a terse post, which had over a thousand retweets and many other engagements as at the time of report, he said “I need money like mad, Jesus.”

A first-year student of Federal University of Technology Owerri (FUTO), Imo State has apparently killed himself.

The body of Daniel Uchenna Nwafor of the Department of Chemistry was found on Tuesday the 23rd of February 2021 dangling on a rope in his lodge at Umuchima in the Ihiagwa area of Owerri, the state capital.

Sources said that the 18-year-old recently returned to the lodge with his mother, who stayed with him for some days before leaving.
Two days after her departure, Nwafor killed himself, it was said.

Nwafor was said to be unwell and in pain.

A police inspector attached to the Owerri Area command police headquarters, simply identified as Umoh, has shot and killed himself.

The incident occurred on Wednesday the 10th of February 2021 at the heart of the state capital, Owerri.

A source at the Area Command headquarters said the officer shot himself after locking himself up in one of the rooms in the quarters.

4 Dangers Of Sleeplessness – See What Sleep Deprivation Can Do To You
The Prodigal: Peter Okoye Releases 2021 Debut Album On Good Friday