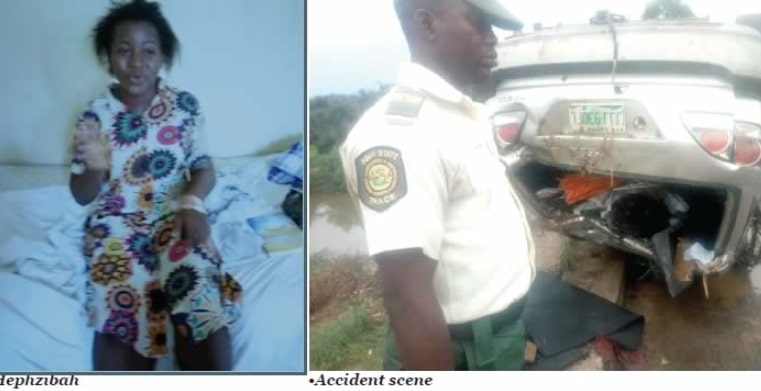 Nigerians Are Good People, Those Who Rescued Us Were Sent By God – Accident Survivor

In this chat with Tunji Bosun, the daughter of a woman who lost her life on the Ijebu Ode Benin Expressway last Sunday still believes that her mother didn’t die.

Even though madam Omowunmi Fawole lost her life in the accident, her daughter, Hephzibah Oluwatimileyin Fawole,19, a 300-level student of the Tai Solarin University of Education, Ijagun, Ijebu-Ode, whom she was taking to school at the time, however, survived the accident.

According to Sunday Punch, the news of her mother’s death had yet to be broken to her.

What happened the day your mother was driving you to school?

I think I should call the driver behind our vehicle a reckless driver.

Why did you say that?

The driver hit our vehicle hard, o de salo (and he ran away).

Did you see the driver of the vehicle that hit yours?

He is a truck driver. The truck was laden with a big, red container. There is an inscription on the container which I cannot recall now.

Is it true that your mother was speeding?

My mother speeding? She was not because she also feared the trailers and tankers. I don’t even know if the driver was drunk or something. He swerved to our side from nowhere and hit us hard. My mother tried to control the vehicle on the Ijebu-Ode bridge. Immediately the truck hit us, it pushed us into the river and the driver sped off.

It was other people on the road that stopped to help us. The vehicle plunged into the river. I didn’t even know that the river was deep until I was rescued out of it. I was already drowning before I saw that there was a space and the water had not covered the vehicle. I then lifted my head up to save myself. I heard some voices shouting for help and saying somebody was still there. Someone jumped into the river and tried to bring me out of it. But the car was locked and they had to break the glass to open the door. I saw a hand that pulled my legs out from the vehicle.

Was the vehicle glass open before the accident?

What was your first reaction as the car plunged into the river?

I was shocked. I even thought I wold be dead. I said my last prayer that God should let me enter His kingdom. I didn’t know that God still has plans for me on earth. I thought I was dying as I drank a lot of water and couldn’t breathe well. It was God that saved me and I have many thanks to say to Him.

I was rushed to the State Hospital, Ijebu-Ode, and was treated. They attended to me immediately by taking care of the injuries I sustained. I didn’t want to leave without my mother initially but they calmed me down, that she was okay and already taken to another hospital for treatment.

Have you ever had an accident?

Yes, there was a time I was coming from school after a three-month strike. My friend, Samuel, and I boarded the same bus. All of a sudden, our car, which took ‘one way’ because there was an accident on the other lane, tried to avoid a pothole and one of the tyres burst on speed. I don’t know if it was caused by the pothole or the driver did not check the tyre before moving.

At the time, another bus was approaching and we had to wait. In fact, the driver lost control and we were shouting ‘blood of Jesus’. It was God’s intervention that saved us. It was on the Ijebu-Ode road. I have witnessed over 10 accidents on the road. Government needs to do something about it. It is getting too much. It was not only me; my friends had also narrated how they escaped from accidents on the road.

What has the experience taught you?

Nigerians are not bad and those who helped my mother and me were sent by God. They really tried for me, they brought me food. There was a woman who behaved like my mother and took care of me till my father and elder brother came. Even when she wanted to leave, I begged her to stay until my father and elder brother arrived. She obliged my request and kept calling to know how I was faring. I thank everybody that saved us. I deeply appreciate the man that saved us when he jumped into the river to ensure that I was saved without knowing me and my mother. He gave us our phones and even put my SIM card into his phone to call my people in Lagos to tell them what happened for them to come. He did a good job.

How do you feel taking examination in the hospital?

This is my first time of sitting for an examination in the hospital. It’s the same way because I don’t cheat; I am a Christian. I answered what I know because that was how I was brought up. I didn’t cheat. Even if I were to be in the exam hall, I would answer the ones I know and leave the rest in God’s hands.

How many courses have you taken so far?

I have completed my exams for the semester.

Were your friends allowed to visit you?

They didn’t allow any other person to visit me except my best friend, Samuel.

How are you feeling now?

I am still feeling pains in my body, but, at least, I am getting better now.

What was your experience like at the TASUED clinic?

The management of TASUED has really done a good job. The way they have been treating me since I came is wonderful. With what I have seen, my perception has changed about the school clinic. The nurses are friendly and the doctors are now my friends. The vice-chancellor is wonderful. He has been nice to me. I was told that he was the one who asked that I should be moved from the State Hospital to the school clinic because of my exams. I really want to thank him so much. What would have happened to me if he didn’t say that?

What were you and your mother discussing before the incident?

We were not discussing anything. I was even on a call with someone while she was driving. It was when the truck driver hit our vehicle and we went off the bridge that my mother shouted, Jesus. Before we knew it, we were already in the river. She was playing a Christian song before the accident.

Where did you go that day before you and your mother set for your school?

We went to church. We left our church in Lagos after service for my school.

What do you want to say about the state of roads in Ogun State?

The roads are bad, especially the Ijebu-Ode road. Even, most times, when taking public transport back to school, I am always afraid because of what the truck and trailer drivers do on the highways. They cause lots of panic. Government should also help us to fix the failed portions on the roads.