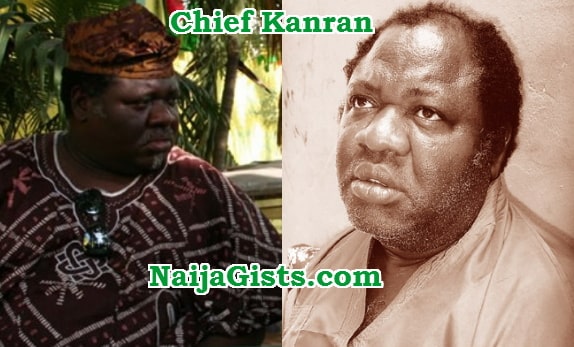 Nigerians Only Help Entertainers Who Are About To Die – Chief Kanran

In a chat with Sunday Scoop, Akinremi said it was hard for indigenous actors to cross over to making English movies. He stated, “They said cinema movies must be done in English. That is okay with me but we should not forget that most Yoruba actors are not cross-over actors.

Also, English actors have turned themselves to gods and they now claim that Nollywood was started by them, which is untrue. It is not easy for a Yoruba actor to feature in English movies because you must be able to read the script and deliver your role perfectly.”

Kanran added that though there were some graduates in the Yoruba movie industry who could play English roles very well, opportunities were limited.

The actor also said there is no reason to be afraid for his health, maintaining that he majorly got money from commercials, not acting.

“To God be the glory, I’m hale and hearty. But for the adverts and jingles that I do, it would have been hard for me (to survive) because acting doesn’t put food on my table anymore. Most of my colleagues who borrowed money to shoot movies are yet to pay back.

Piracy has really affected us and people don’t buy these films like they used to. Also, Nigerians only come to an actor’s aid when he or she is about to die. We should celebrate our heroes when they are still alive.

“I still go to locations but I do more of soap operas these days. I did two recently. I also have scripts I plan to produce myself but I’m afraid of piracy. I don’t think there’s anyone who wants to venture into a business and there will be nothing to show for it at the end of the day.”

See Singer Simi In Action In First Nollywood Movie
Fadeyi Oloro: I Invested Millions In Movies But Didn’t Make My Money Back