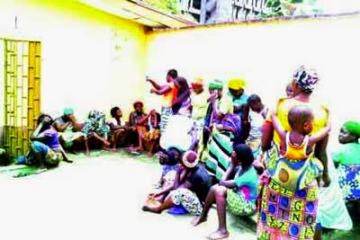 The Nigeria Immigration Service, Lagos State Command, on Thursday arrested 27 women and a 15-year-old boy in the Lagos Mainland area of the state.

The suspects were nationals of Benin Republic, Togo and Ghana.

They were said to be without a valid entry passport or visa, and would be repatriated as soon as the agency concluded all necessary investigation.

A few of the women were nursing mothers who had their babies strapped to their backs.

While the elderly ones showed remorse, the young ladies in the group chatted away as they avoided press interview and snapshots.

A woman in her 50s, who identified herself as Mrs Oluwaseun Joseph, from Cotonou, Benin Republic, was in tears as she pleaded for time to get her documents.

Joseph, who spoke in Yoruba with PUNCH Metro, said although she had stayed long in Nigeria, she did not know the importance of a valid passport until she was arrested on Thursday.

She said, “I have been in this country for a long time. I gave birth to my three children here. My husband who is also from Benin Republic, died some years ago.

“The work I do is to carry people’s load at Ebute Meta. I started the work when I was sick and needed money.

“That was what I was doing when they came to arrest me. If I had known about the document, I would have got it long ago. What will I do now? My kids are still in school.”

Fifteen-year-old Ishay Befaye said he had been in Lagos for only one month.

He said, “I am 15 years old. I came to Lagos on my own. My father is dead while my mother is in Benin Republic. I finished learning bricklaying in Benin and I came to Nigeria to find work. I planned to raise enough money and then regularise my papers. I make a lot of money from the work.

“I have a bank account in Lagos where I keep the money. I am just begging them to give me some time to get home and tell my friends that I want to go to the village to get my papers.”

But the state’s Comptroller, Justina Ahamdu, told our correspondent the command would not give the illegal immigrants a second chance.

Ahmadu said the agency had had a meeting with heads of ECOWAS members in the state, to warn against the danger of living in the country without valid documents.

She said, “I had a meeting with the heads of ECOWAS in the state in August when I resumed office, and I told them to warn their people staying in the country illegally, that if we picked them, we would not listen to them. And it was during the meeting I learnt that they also usually had periodic meetings with their fellow countrymen.

“Normally, when we go for raids like this, we profile and screen them before repatriating them. While repatriating them, we tell them that to be legal residents, they need to get valid documents and pass through authorised routes, before they can be allowed to stay. This is a continuous process.”

She warned that Nigerians, who keep illegal immigrants for cheap labour or obstruct officials of the agency from making arrests, may also be made to face the wrath of the law.