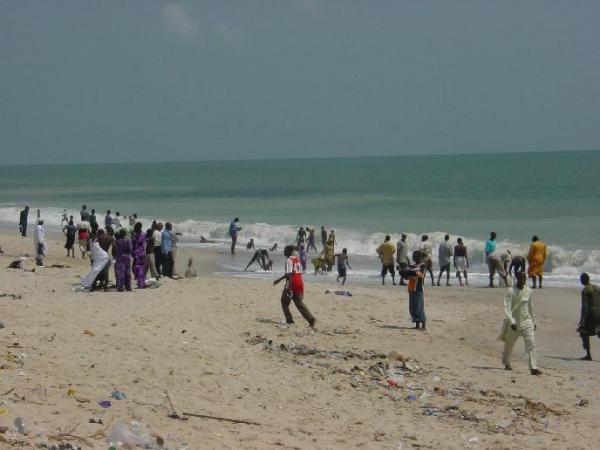 The Catholic community in Lagos is yet to come to terms with the tragic death of Rev. Francis Alex Okafor. The man drowned during a send-forth party organised in his honour at the Ibeshe Beach in Oriade Lo­cal Council Development Area of the state.

Eyewitness account said, while Rev. Okafor and some of his guests were swimming, a strong current came and carried him, together with some of the people. Divers who were immediately mo­bilised were able to rescue three of them, while Rev Okafor could not be found. Two days after, his lifeless body was found floating at the edge of the sea.

Rev. Okafor who was in his 30s, was ordained Deacon on July 4, 2015, and was subsequently posted to St. Stephen’s Catholic Church, Agboju, Lagos for the mandatory six weeks apostolic work.

When Saturday Sun visited the par­ish within the week, the whole place wore sombre look. There were no ac­tivities in the premises. The few peo­ple around were in groups, obviously discussing the incident.

Describing the incident as a rude shock, Mr. Percy Okuofo, president of Redemption Youth Vocation Ministry (RYVM), the group which organised the ill-fated send-forth, told Saturday Sun that the late Reverend was an ex­cellent example to the youths.

According to him, “By Catho­lic rules, before one could become a priest, he must have undergone about nine years of intensive and rigorous training, which also involves an apos­tolic work in a Catholic church. This would enable him to get acquainted with all it takes to celebrate a mass and acquire more experience in the vari­ous aspects of church administration. For the late Rev he has already been ordained a deacon, and waiting to be ordained a priest next year.

“Having completed the six weeks apostolic work at St. Stephen’s Catho­lic Church Agboju, the late Okafor was full of joy and was warming up to meet his family in Zaria. The Par­ish Priest Rev. Father Michael Okoh, the parishioners and the members of the church planned a colourful send-forth for him on Sunday, August 16, after which he would leave for further engagements.”

Ahead of the proposed sent-forth party, the youths of the church under the umbrella of RSYVM, decided to organise the beach party for him.

Battling to control his tears, Okuofo said: “while some of the youths and the late Reverend were swimming, three of them, including the clergy were swept away by a strong current and vanished in the water. Onlookers and other swimmers were surprised at what had happened and immediately went on a rescue mission.

“Luckily, some divers around were able to save two of the youths, a boy and a girl, while Okafor’s body could not be found. We kept monitoring the area till his bloated body surfaced.”

During the Service of Songs organ­ised by the church, Priest in-charge, Rev Fr Michael Okoh described the late Okafor as an obedient servant of God and a hardworking gentleman who did his best to lift the church within the short period he came.

The late Okafor who hailed from Anambra State, was trained by his single mother. He was to be ordained priest in July 2016, after about nine years training. It was also learnt that he was the only son of his parents.