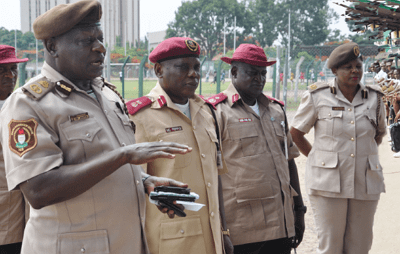 An official of the Nigeria Immigration Service, NIS, 38-year-old Emeka Francis was on Wednesday arraigned before an Ikeja Magistrates’ Court for allegedly impersonating an Interpol officer and defrauding a traveller of N3.99 million.

She said a National Drug Law Enforcement Agency (NDLEA) official accosted the complainant and handed him over to a group of men claiming to be Interpol officers, who searched his luggage.

She said the complainant, who was held hostage for four hours, called his mother, who transferred the cash to the defendant’s two accounts.

Chief Magistrate T.A. Ojo granted him N500, 000 bail, with two sureties in the like sum.

The sureties, she said, must be employed and produce evidence of three years tax payment to the Lagos State Government.

Ojo said the sureties must be relatives of the defendant and live within the court’s jurisdiction.

The case continues on June 18.