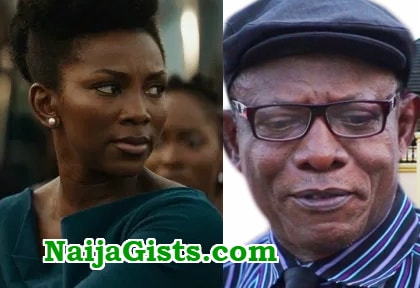 Exactly 2 years after versatile actress, Genevieve Nnaji was profiled at the Toronto International Film Festival (TIFF) as the leading lady of Nollywood and the face of African cinema, the thespian is back to the North American film festival with ‘LIONHEART’, her first film as a film director.

The film follows ‘Road To Yesterday’ her 2015 film as a producer, directed by Ishaya Bako.

For ‘Road to Yesterday’ and her efforts in films such as ‘Ijé: The Journey’ and ‘Half of a Yellow Sun’, TIFF, in 2016 honoured Ms. Nnaji alongside Kunle Afolayan in a programme called ‘In Conversation With… Kunle Afolayan and Genevieve Nnaji’. She was described by the organisers as a hugely successful producer and media entrepreneur, who in addition strives to generate positive images of Africa and is a major voice in the #BringBackOurGirls campaign.

It is safe to say that with a lionheart, Nnaji returns to TIFF as a film director in fulfillment of the expectations of many concerning her career. The film which co-stars veteran comic actor, Nkem Owoh has been listed in the 2018 Discovery segment of the festival alongside Adewale Akinnuoye-Agbaje’s ‘Farming’ in which she also features.

For the World Premiere of LIONHEART, organisers have confirmed that ‘both Ms. Nnaji and her co-star, Nkem Owoh, will both be attending the festival…”

LIONHEART tells the story of a young woman, Adaeze Obiagu (Genevieve Nnaji), who becomes saddled with the responsibility of running her sick father’s business under the suffocating supervision of an intensely crude and eccentric uncle. Her competing business instincts and family obligations become a catalyst for drastic change not everyone is ready to embrace.

Continue Reading
You may also like...
Related Topics:genevieve nnaji, movie