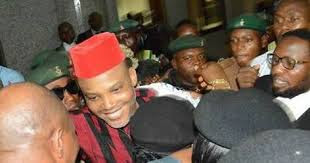 IPOB activist, Nnamdi Kanu has returned to Kuje Prison pending the time he will fulfill his bail conditions.

There was a mild jubilation in his family home yesterday however, their joy was short lived when they learnt of the impossible conditions set in his bail agreement.

His father, Afaraukwu Ineku of Umuahia Kingdom told reporters in his palace at Isiama Afaraukwu Ibeku yesterday that the Nigerian government is looking for ways to keep his son in detention for life.

The traditional ruler said it sounds illogical for a court in Nigeria to expect a Jewish leader in Israel to stand as surety for a person standing trial on treason in Nigeria.

He urged Ndigbo to unite for the freedom of his son who is currently waiting to perfect his bail term at Kuje prison.

He hailed Ekiti State Governor Ayo Fayose and former Aviation Minister Femi Fani-Kayode for their solidarity with his son, but frowned at the absence of Igbo leaders at the court premises, saying that was an indication that they were not supporting the Biafra cause.

Kanu’s lawyer however said he will meet the bail condition set for him within 48 hours.