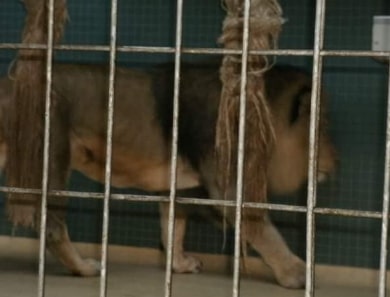 The lion that escaped from Kano Zoological Garden few days ago has returned.

According to officials, the lion voluntarily returned to the zoo 48 hours after escape.

The MD of the Zoo, Gwadabe Gwarzo told reporters in Kano today that the lion returned quietly on Monday around 6:59am.

He explained the trick used to cajole the stubborn lion to its cage was the roar of an older lion.

It returned after Kano Governor, Dr Abdullahi Umar Ganduje had given a shoot- on- sight order to kill the 15-year- old lion it threatened human life or attempted to cause havoc.

Ganduje’s order followed information that several moves by experts to capture it failed.

It was learnt the Kano Zoo authorities solicited support of experts from Abuja.

Though the experts shot the lion with two tranquilizer rifles, it remained active causing panic in the city.