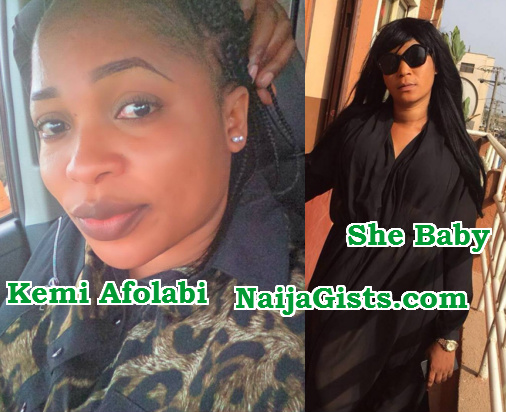 Highly controversial ‘Olosho’ singer, Seyi Ariyo aka She Baby took to her BB chat few hours ago to call out star actress Kemi Afolabi for refusing to return a dress she allegedly borrowed from her.

According to reports, She Baby exposed Kemi Afolabi to all her colleagues in a BB broadcast message after the delicious soup they both prepared suddenly turn sour.

It took the intervention of Saidi Balogun and Aremu Afolayan to get Seyi Ariyo to remove the embarrassing message.

Check out the distasteful message Miss Ariyo sent to friends few hours ago;

“Kemi Afolabi, you are coward! Pic up snitch! Oloriburuku, you are a disgrace to Nollywood! Please return my clothes; your case is so pitiful. Get a life!”

The two are reportedly fighting over star actor Odunlade Adekola.

We learnt the two are madly in love with the married father of four who often feature Kemi Afolabi in his movies. This and many other issue broke the friendship bond between two.

Continue Reading
You may also like...
Related Topics:cloth, kemi afolabi, she baby