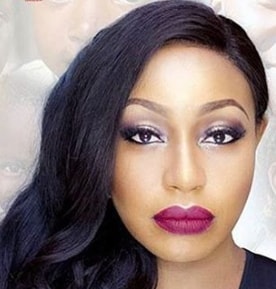 If you are searching for the rare combination of beauty and brains in Nigeria’s movie industry Nollywood, you do not need to look any further because eastern princess and actress Rita Dominic is a perfect blend of both.

Rita Dominic whose full name is Rita Uchenna Nkem Dominic Nwaturuocha was born on 12th of July 1975 into a royal family in Mbaise, Imo State Nigeria.
Her family consists of 6 people, her parents being the King and Queen of the Royal Nwaturocha family of Mbaise Local Government in Imo State. She was the last of four children and showed exceptional beauty and intelligence right from her early days.

Her parents were educated elites, her father was a medical doctor and her mother was also a nurse. Her exceptional wit is of no surprise as it is quite obvious who she got those special genes from.
Rita started following her passion to become an actress from her young age, she was an active member of many drama clubs while she was having her secondary school education at Federal Government College Ikot Ekpene in Akwa Ibom State. She had her university education at the University of Port Harcourt. She was very enthusiastic about becoming an actress and this influenced her choice of what to learn while she was in the university. Rita Dominic went on to study Theatre Arts while in the university and finished with a Bachelor of Arts (B. A) honours degree in the year 1999.

Although she had always been in various acting events in the past she had her first professional acting role in 1998 in a movie titled “A time to kill”. The movie featured some prominent actors of that time and it served as a stepping stone for her career. Ever since then she has featured in 100s of movies in Nollywood.
Some of the salient movies in which she has featured in include “children of terror” in 1998, the blockbuster movie “The intruder” with legendary actors RMD and Stella Damascus in 2004 and a more recent “Iyore”.

Rita Dominic is one actress that is really advisable to reckon with as she seems to have that magic influence. Many of the films she has featured in have made it to the international stage and have received many awards.
She also has many reputable awards to her name such as the award of ‘Best Actress in Lead Role’ at the Nigeria Movie Awards in 2013 and some others. She is one of the record holders in the entertainment scene and over the years she has had 14 AMVCA ( Africa Magic Viewers Choice Awards) nominations, managing to win a splendid amount of four.

Her ingenuity and skills in acting are also confirmed by the fact that she is one of the few actresses to be recognized by City People with the award of ‘Outstanding Actress’ in 2004.
During her stint as an actress she has been involved with not only the Nigerian movie industry Nollywood but also Ghana and some other African countries.

Once again she played her role to the maximum and won herself some awards, one of those awards is ‘Best Actress Award’ she won at the Ghana Movie Awards. Rita Dominic is an A-list actress with over 20 awards to her name from both the local and international community.

She is also a producer, she has produced only two movies which are “The Meeting” in 2012 and “Suru Lere” in 2016. The second movie which she produced was a great success and it went on to win City People Award for ‘Movie of the Year’. Apart from being a gifted actress and producer Rita Dominic possesses a unique ability of being very flexible. Flexible in the sense that she has managed to become an active member in both the Yoruba and Igbo sections of Nollywood. Her beauty, talent and skills have helped her stand tall despite the issue of ethnic favouritism present in the Nigeria Movie Industry.

Living a very busy life as one of the biggest stars in Nigeria and having a family is a tough task and maybe that is the reason why Rita Dominic has decided to stay unmarried over the years, or maybe she is just not ready. Well, those questions are for her to answer.

In the past she has been involved in romantic relationships with some very charming men but has managed to keep most of her relationships under wraps and far away from public view. There was once a rumour that she was dating popular actor and Nollywood bad boy Jim Iyke.
Although she is unmarried and does not disclose information about her relationships Rita Dominic has admitted that she really admires the pleasures attributed with having a partner and being in a romantic relationship. She once said in an interview with Shick magazine that she is undeniably pressured by society to get married but will only settle down when she believes she has found the right man.

Rita Dominic is still very active in the entertainment scene having featured in some movies in recent times, examples of such movies are “Mr & Mrs Chapter 2” in 2017, “Blind”and “Blindspot” which were just released in 2018. From the plot and roles in which she plays in recent movies it is obvious that Rita Dominic is now taking a more activistic stance on issues. Her movies are now used to pass a message on important issues compared to roles she used to play in movies in the past.

She made a controversial statement that received praises and criticisms from both fans and colleagues a few months ago. She attacked movie producers and sponsors claiming that many of the movies that were being aired in cinemas across the nation do not deserve to be in a cinema. Rita Dominic has always been one actress that never fails to speak her mind.

The 43 year old actress isn’t thinking about applying the brakes anytime soon and her fans are expecting more interesting projects from her, and maybe she will settle down in the nearest future.

Her estimated net worth is N950Million.