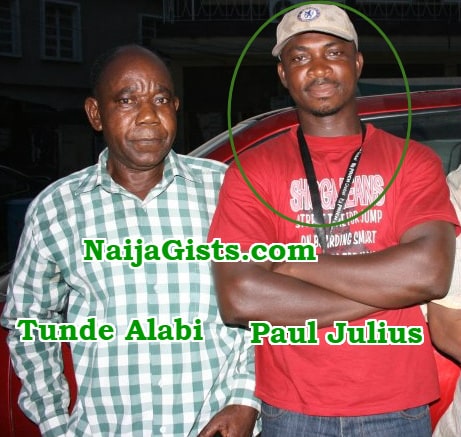 Veteran Nollywood actor Tunde Alabi in not a happy man at the moment as the man who helped him raise  money for treatment after diabetes led to his right leg amputation has duped him of a whopping N1.5million.

His life has been turned upside down after losing his leg. He now goes cap in hand begging for what to eat.

While he was gasping for breath at the hospital two years ago, he alleged that his friend, who claimed to be a film director Paul Julius was busy milking him dry in the name of raising funds on Alabi’s behalf. The bedridden actor described his friend as a wolf in sheep’s clothing that came to compound his predicament and left him shattered and broken-hearted.

When the reporter recently visited the veteran actor who featured in the early series of late Segun Olusola’s The Village Headmaster, at his residence at 50, Ojo Igbede Road, near Alaba International Market in Lagos, he cut a pitiable sight. Nothing was left to be desired in his large room. The window blinds were obliterated by sticky cobwebs. Old and seemingly abandoned property dotted the room. 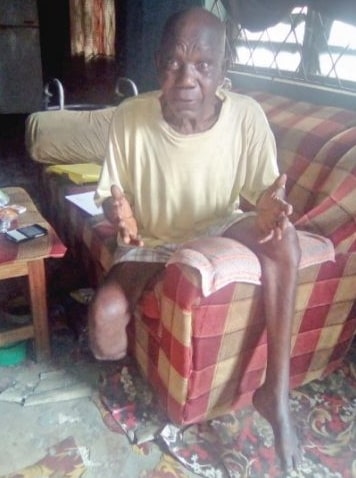 As he sat to narrate what has befallen him in the last few years, his face was enveloped by sorrow, pain and tears. He told Daily Sun that he had seen hell since his travails started. Having been rendered homeless, he now squats with his elder sister’s son, Alhaji Mukaila Adeleke. Although he has a grown-up daughter, Tolu, the thespian said he was yet to get married.

The 64-year-old man revealed that he started acting as far back as 1976. Also, his prominent role in the old soap opera called Palace, produced by Ralph Nwadike was one that cannot be easily erased from viewers’ memory. The television programme has been reviewed and revived, and now aired every Sunday on AIT.

“Despite my condition, l cannot stop acting. Even the one showing now, Palace, the producer came to record me at the hospital. Thank God my brain is not affected. It is only one of my legs that is amputated. Acting is in my blood, that is why l can’t stop it except death,” he said.

Alabi is described by many as a thoroughbred professional of the old order. He had groomed and mentored many young actors. According to the actor, it gave him joy when young ones drew from his fountain of knowledge, which he said he freely gave without expecting any reward. It was gathered that his speed in interpreting roles set him apart from many of his contemporaries.

Recalling how he was struck by an ailment, he said he had acted at the Muson Centre on May 1, 2016 and everything went successfully. But he said it came to him as a shock when he discovered the following day that his mouth slightly shifted. He narrated how he went to the Federal Medical Centre (FMC), Ebute-Metta, Lagos, for prompt treatment and how he fully bounced back to life about two months later.

While he was still celebrating his healing from the ailment, he said he was knocked down on July 19, 2016 by another disease. He said he was in his room at the Artists Village, an annex of National Theatre, Iganmu, Lagos when his leg became swollen to the size that was beyond imagination. He claimed that his sickness was a spiritual attack orchestrated by some of his colleagues who saw him progressing rapidly and collecting more jobs than others in the industry.

Alabi said his daughter rushed him to FMC for another rounds of diagnosis and treatment. He lamented that despite the over N437,000 that Tolu spent on him at the hospital, his ailment saw no significant improvement. The actor, who wore a sober look, said he also exhausted all the money he had saved before the sickness visited him. 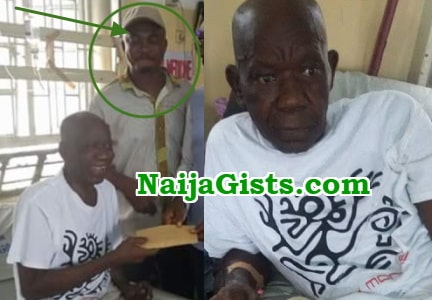 According to Alabi, when the family had emptied every kobo they had even as his illness worsened, one of his friends Paul Julius, volunteered to help the patient raise money through public donations.

The sick man, who was in a helpless situation as at that moment, said he jumped at the offer without giving it a second thought. He said he had no reason to doubt the fellow as he had not heard or seen him with unquestionable character throughout the few years they had known each other.

“When any of us is down or hospitalised, it is normal in our entertainment industry to rally round the fellow for support. After ten days of my admission at the FMC, this my supposed friend came to see me and promised to help me raise money.

“Towards the end of September 2016, I was referred to the General Hospital, Odan, Lagos Island. After battling to keep me alive, on October 24, 2016, my leg was amputated.

“Immediately my leg was amputated, this man took to the social media to plead with the public to assist me financially and otherwise for a comprehensive treatment. In response to the campaign on the internet, people donated generously to my account. I am forever indebted to all Nigerians who donated almost two million towards my well-being.

“I didn’t really suspect him because he gave out my account number to the public but I didn’t know that he was a smart man. When he saw how money was pouring into my account because I made my telephone accessible to him, then he began to develop different strategies to collect my money.

“On my own volition, I felt he was entitled to 20 percent of whatever money he helped me realise, since he brought the idea and I was giving him the equivalent anytime donations came in. Yet, he was no satisfied with that, which he claimed was expended on running around for my sake. I usually gave him my ATM card to make withdrawals.

“On seeing my account statement just four days after my amputation, he asked me to give him four hundred thousand naira to buy a vehicle for himself. He didn’t care whether I would survive or not. When that didn’t work, he came again two days later and said he needed to repair his car so that he could use it to take me home after my discharge. Having convinced me, I signed a cheque of one hundred and fifty thousand for him.

“He also collected N100,000 for 2016 Xmas; N150,000 for Abuja trip; N100, 000 for online banking and another N80, 000 for ATM. The most painful was the N500, 000 he collected, which he claimed he had used to rent an apartment for me. On a particular day, he left with my ATM card and pretended as if he forgot to drop it with me. And I received an alert the following day of a hundred thousand. I called him immediately from my hospital bed and he said he would explain later which he never did.”

The actor said the said friend’s tricks became clearer to him when he told him that the landlord of the house was still working on the purported rented apartment. He said he was told to hang on at any of his relatives’ place for a while, pending when the new apartment would be completed.

He said he was dropped off with little or nothing left on him to continue life. Days ran into weeks and months, and the waiting continued unabated.

“I thought he was my friend, I didn’t know he is a green snake under the green grass. What he did to me is sad. The drugs I am supposed to be taking daily are not there due to lack of fund. He calls himself a film director but he is not registered with our association,” Alabi said.

Pained by how he was treated, the thespian said he reported the matter to the Actors Guild of Nigeria (AGN), which quickly set up a panel of investigation to look into the matter.

Having been invited by the panel for inquiry, he claimed that the accused came to his house on April 16, 2018, begging him in the presence of Alabi’s nephew, to stop the investigation. But Alabi said he told the actors that all he needed was his 1.5 million naira that was collected from his account.

“When he saw that I was not ready to let go, he began to threaten me that he is connected to influential people in the society and that I have nobody to fight for me. The panel has concluded its sittings but it is yet to come out with a report.

“I want the security agencies to take over the case. This is another form of corruption which President Muhammadu Buhari led administration is fighting.

“But I must give special thanks to Prince Dan Imodu, Tunji Bamishigbin, Charles Owoyemi, Chinwe Abara, Mahamood Alli-Balogun, Jimi Odumosu, Aremo Babayemi, Sarafa Abagun, Wale Gbadamoshi, Bosun Awaye who refused to abandon me in my ordeal,” he said.

He specially commended Dr Temitayo Omotola Ajayi, the medic who monitored his case, on and off the hospital, to a logical conclusion.