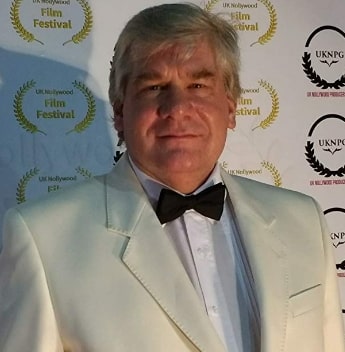 “There Is Future For Nollywood” – Int’l Producer Lucien Morgan

Int’l producer Lucien Morgan who was in Nigeria recently for a movie project has noted that the Nigeria movie industry if invested in by the government can become one of the leading industries and also compete at international awards.

The co-producer of the feature film thriller, ‘Return of the Don’ which won the Award for Recognition at the Hollywood International Moving Pictures Festival 2016, said working with Nigerian actors was a great experience.

“It is a great pleasure to be in this movie. The experience is a very good one, well organised and a very clear script. The locations were also good ones to work at. And i was able to have free hands with some of the costumers which are very important too. Also the actors were very nice to work with. I enjoyed every minute of it.”

“I think Nigerian actors know what they are doing. It is not in my position to advise them on what to do or not to do. But it will be wonderful to see a Nigerian stage production at the Russian classics, like Check-off. But i think that is the producers or new writers. But I think Nigerian actors are fantastic”, speaking on Nigerian being professionals

Morgan also commended Nigerian movies making waves abroad. “”I have found out that they have done productions in Nollywood UK, and they are good. I think what is at fault here If i may say so, is that there isn’t enough government assistance to make films. There isn’t enough government encouragement or funding or offers that could enable directors or producers to make something that could be taken to the international market.

“Films in France, Italy, and Germany, are not in very good shape at the moment, because they do not have the place to distribute them. What you have here in Nigeria is a clear open market. It is going to be a boom market and i think it will only take one or two Nigerian films to win major awards and be international recognised at the Academy in Los Angeles or Cannes”, he added.

Speaking on one of the challenges of filmmaker, Morgan noted that Nigerian films will become one of the largest internationally if the budget is right. “In five year’s time, I predict Nollywood will be a world leader and highly respected in the industry. The directors/producers are excellent. What is not excellent is the attitude of the government not to back the industry enough. Nollywood have got to lift the budgets to be able to compete internationally. These days it’s harder and harder, we live in the world of 10,000-20,000 feature films. The market is flooded.”