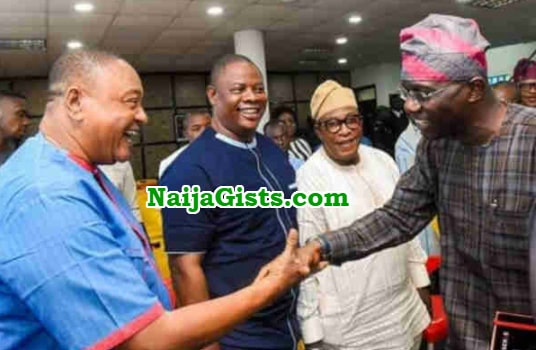 By Vanessa Obioha, This Day Live

With just a few days to the presidential election, a group of Nollywood actors has endorsed the All Progressives Congress APC presidential and gubernatorial candidate, President Muhammadu Buhari and Babajide Sanwo-Olu respectively in the forthcoming elections.

The group which identified itself as the League of Lagos Artistes made the announcement recently at a press briefing, highlighting the reason behind its decision

“The lack of discipline has given room for unmitigated corruption, a culture of waste, injustice in every strata of our society and chronic lack of patriotism.These, added together, have been responsible for the country’s slow pace of development.

Bearing in mind the need to instill discipline in the polity to curb corruption, injustice, wasteful and profligate spending of the nation’s resources and build a sense of patriotism in Nigerians, we have come to the conclusion that only one man, at the moment fit into the bill to help steer the ship of state and continue in the gradual redemption of our national pride and that man is President Muhammadu Buhari,” said veteran actor, Jide Kososko.

His thoughts were re-echoed by the Nollywood members, mostly Yoruba who gathered at the Lagos Television premises in Agidingbi, Ikeja to make the announcement despite the heavy rainfall that morning. The likes of Iyabo Ojo, Adebayo Salami, Yemi Solade, Foluke Daramola were some of the familiar faces at the gathering.

The Nollywood members are confident that their preferred candidates will improve the creative industry, a fact which the actors testified is already seen in the commitment shown by Sanwo-Olu and his running mate Femi Hamzat in different engagements.

Recently, members of the creative industry have come under fire for endorsing candidates in the upcoming elections. Reacting to such statements, the group said that as creative persons, it is their civic responsibility to not only to vote but also “to collectively engage in educating and informing our people through our trade, entertainment.”

The group also stated that it was necessary they intimated the press of their declaration, despite the short notice to show a united front since they had already engaged their fans in different platforms.