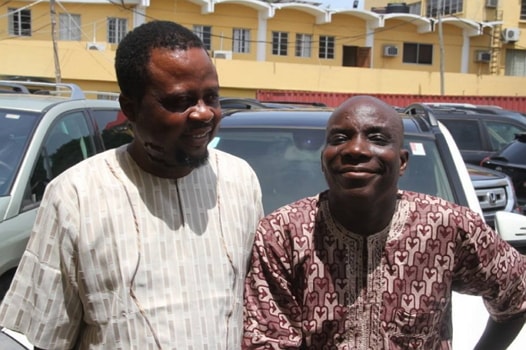 Lagos Zonal office of the EFCC has arrested two members of a syndicate of fraudsters for offences bordering on obtaining money under false pretences to the tune of over N7, 000, 000.00( Seven Million Naira). The suspects were arrested at Elomaz Hotel, Maryland, Lagos, following a petition received by the Commission from a complainant.

The complainant alleged that he was approached by one Dr. Lawal Ibrahim, who claimed to be the representative of an American company, Avis Beverages, in Africa for a purported agro-allied business.

He also alleged that he was subsequently introduced to one Dr. Ryan Wood, the purported company’s President, and Alhaji Akeem Olagbaju Jamiu, who also posed as the producer of the commodity.

The complainant further alleged that he was asked to register with the commodity producer with N150, 000.00 and also make a refundable deposit of N350, 000.00

As part of the grand plan to validate their claim, the complainant alleged that he was asked to register a company and acquire necessary documentations, including certificate of ownership, tax certificate, BNI, NAFDAC, Narcotics Control Board and money laundering clearance certificates in furtherance of the business.

The fraudsters were alleged to have also instructed the complainant to register with Avis Beverages with $65,000.00USD once it was clear that he could obtain all the necessary documents.

However, the complainant, through a petition, sought the intervention of the Commission when he became suspicious of the transaction, a development that eventually led to the arrest of the suspected fraudsters.

The suspects will soon be charged to court as soon as investigations are concluded.

Continue Reading
You may also like...
Related Topics:arrested, fraudsters, lagos