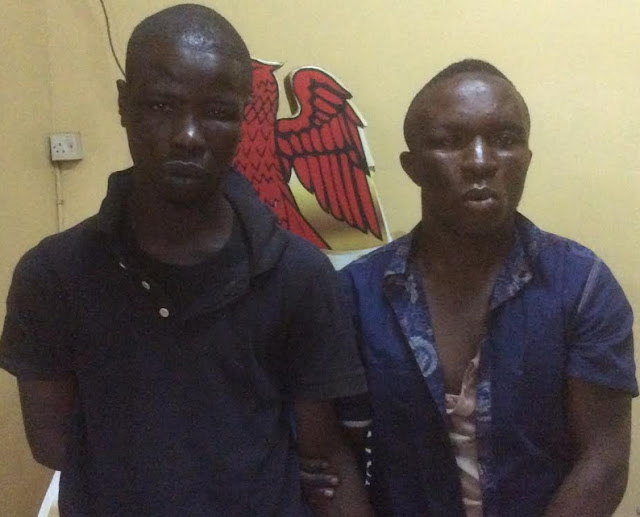 RRS operatives of Lagos Police Command have arrested two suspected robbers who specialise in attacking and robbing motorists and commuters in Mile 2 area of Lagos State.

The suspects, Sunday Chukwunweike (26) and Emmanuel Friday (28) were arrested after mid – night on Mile 2 Bridge in Lagos after robbing a breakdown truck’s driver, Yinusa Salami alongside two other accomplices, Silas and Sule, both still at large of a sum of N45,000 and his mobile phone.

In his confession, one of the suspects, Emmanuel, a secondary school dropout who later became a bus conductor in the area said, “I was in the company of my friends when we saw the driver. He was coming from Apapa. He stopped on the bridge to pick somebody.

It was the elderly ones among us that robbed him. I thought they were going to drop some money for us to eat when approached him.

It was Silas and Sule that dipped their hands in his pockets and brough out some money.
They took the money and the phone and we went our way. 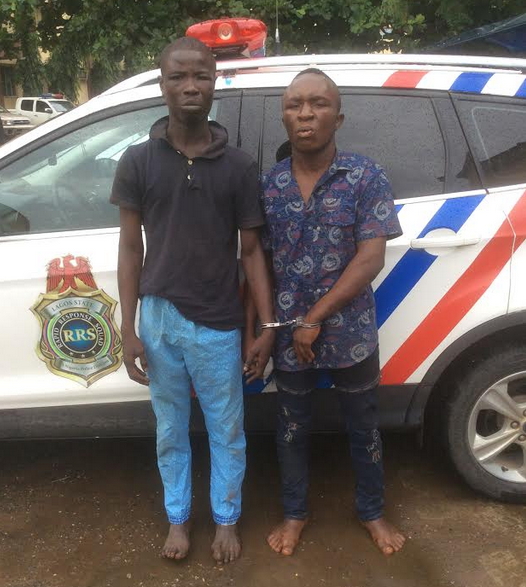 We were hungry, that was what made us follow them. I took to the street after dropping out of school to fend for myself.

Although, I have participated in so many crimes such as inter-group fight, hemp smoking, pick pocketing and the rest, I have never been involved in robbery or threatening people with gun or dangerous objects”.

Emmanuel added, “I have been to the prison twice, one in 2013 where I spent 7 months and also in 2016 where I bagged 3 months after engaging in street fighting”

He continued: “Silas and Sule forcefully collected a sum of N45,000 from the truck driver and gave both me and Chukwunweike N10,000 as share from the loot. We went back to our usual joint before the truck driver led men of the Rapid Response Squad to arrest us”.

On his part, Chukwunweike, an ex-convict confessed to the crime but blamed his wrong doing to the hard life which he had expose himself to on the street. “I came back from prison after spending 3 months but here I am again in another mess”.

The truck driver, Yinusa Salami stated that he stopped at the bridge to pick up his brother who was waiting for him there. “I was coming from Apapa and heading to Osun. I wanted to assist my brother who was equally going to Osun State. I got to the bridge and I alighted from the truck, that was when I saw four of them.

I was about giving them some money when they seized my arms, before dragging me to the ground and forcefully collected all the money in my pocket totalling N45,000 claiming they control the area and nothing can happen afterwards.

I approached men of RRS stationed at the other side of the bridge to report the incident. They followed me to track the boys. That was when we saw the two of them trying to split their own share of the money. They were arrested there but the other two guys escaped.”

The suspects have been transferred to the State Criminal Investigation Department for further investigations and prosecution.

11 Killed By Flood In Niger State As Residents In Submerged Homes Were Swept Away By Floods
For Failing To Supply Timber Worth N330K, Abuja Sawmill Operator Jailed For 6 Months