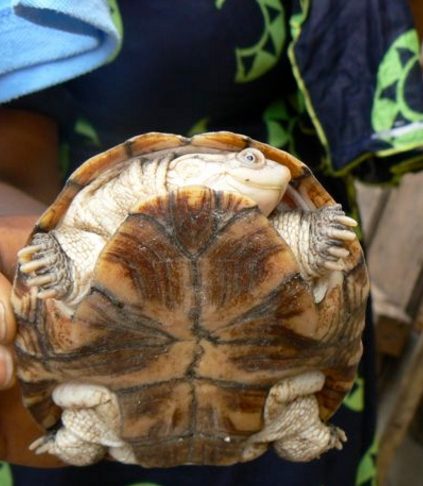 A suspected leader of a notorious armed robbery gang, Nasim Aliu has confessed that he got his power from a magical tortoise.

Aliu was arrested with the fetish tor­toise by the operatives of the Special Anti Robbery Squad (SARS) unit of the Kogi State police command after several months of trailing his move­ments.

Aliu who hails from Agheva Obehi­ra in Okehi Local Government Area of the state said he had operated for more than 12 times with the magical tortoise but expressed surprise how the opera­tives of SARS arrested him cheaply.

He spoke to Daily Sun: “Yes, I am a leader of a robbery gang which robbed on major highways in Kogi and Edo States, we had operated for more than 12 times Successfully without being caught and the success of these rob­beries was as a result of the protection of this tortoise.

“Anytime I wanted to go for robbery operation, I would consult the tortoise who will tell me whether the robbery would be successful or not. After say­ing some incantation to it, the tortoise would speak and tell me to go or not to go.

“In serious operation, I would hang the tortoise on my chest, covering it with my shirt and anytime I did that ,it helped to protect me from bullets. No enemy’s bullets can hit me any time I hang it on my chest.”

Aliu who looked ruffled, touched the tortoise in the presence of our cor­respondent and retorted, “but you my great magical tortoise, you failed to tell me that the police were around the corner of my house, you failed to speak and you failed to give your usual signs.” He looked up and said: “It is now that I believe this adage ‘every day for the thief, one day for the owner.”

Speaking on the arrest, the state Commissioner of Police, Mr Emmanuel Ojukwu said Aliu and his gang members had been terrorising innocent mo­torists for a long time, saying they specialised in robbing along Lokoja/ Okene, and Okene/Auchi/ Benin high ways.

He said the suspect had earlier been arrested but escaped from police cus­tody and was one of the criminals that escaped a jail break at Kotonkarfi about two years ago.

The CP said since then, his men had been trailing the suspect until they have a major breakthrough re­cently when through a tip-off they were able to trace the suspect’s to his residence.

He said when his men from SARS led by the commander, Ayeni Olu­wadare, a Deputy Super­intendent of Police in­vaded the residence of the suspect around 2 am, the suspect hid himself in the ceiling of his house, and it took the police several hours before they could pin him down and arrest­ed him.

The CP said the suspect has made useful state­ments to the police and his men were already on the trail of other gang members, some of who he said had fled the area on hearing that their leader has been arrested.

He said as soon as the police complete their in­vestigations, the suspect would be arraigned in court for prosecution.