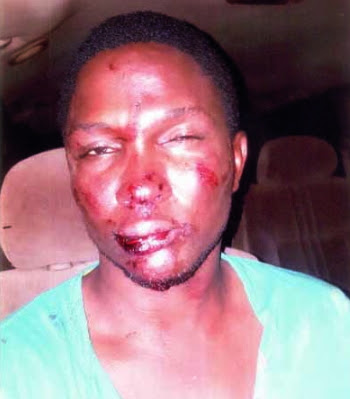 A businessman based in Nsukka, Ekene Ani is just too happy and grateful to the Almighty God, having survived an attempt on his life by a gang, which his neighbour in the market at Achara road, Nsukka, Enugu State is alleged to have hired to kill him.

By divine intervention, Ani escaped the alleged assassination attempt. Accompanied by his lawyer, he lodged a complaint at the headquarters of the police command inn Enugu.

This prompted the police commissioner to direct the Deputy Commissioner in charge of the State Criminal Investigation Department, Mr. Ishola Abdullahi to launch an investigation into the matter. New was promptly arrested and held in police custody until the matter was charged to court, and he was subsequently remanded in prison.

While he was in police custody, Nweke refused to react to the allegation, when approached by the Sunday Sun for a chat. However, the alleged victim, Ani recounted what happened to Sunday Sun: “I did not have God on my side I could have die on the night of savage attack. I was getting close to my house about 8.10pm, after closing from my shop at Nsukka Main Market. Suddenly, when I got to the junction at Achara road, a gang of five cult students blocked my car. One of them drew out a gun and hit me on the head. The blow forced me out of the car immediately.

“Then Chinedu Nweke, who is my neighbour in the market pulled out a big wheel spanner and hit me on the head. The other members of the gang, who were armed with a jack and iron rod which they took from the same boot began hitting me all over and I collapsed on the ground. They robbed me of sum of N557,500, 000. Later they dropped me close to my residence, unnoticed and escaped. When Im regained some strength, I went to Nsukka Police Division and reported the case,” he said.

“Then I was taken to Shanahan Hospital, Nsukka, where I was hospitalized in the intensive care unit before I was referred to a specialist hospital in Enugu for specialist medical attention, on account of the internal injuries I sustained during the attack on me.

“I must say that Chinedu Nweke had always envied me for the success of my business. We share the same line at Nsukka market” he stated.

Danmallam assured that the police would pursue the case with due diligently. [source]