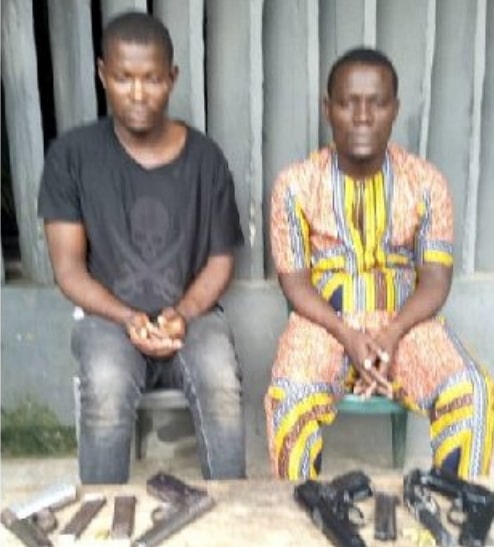 A 37-year-old suspected member of the National Union of Road Transport Workers (NURTW) (name withheld), on Wednesday, confessed being in possession of two Beretta Pistols and four ammunition.

The suspect, speaking with the News Agency of Nigeria (NAN), on Wednesday at the Anti-Cultism Unit of the Lagos Police Command in Lagos, said he kept the gun in case of street fight.

NAN reports that the suspect was arrested following a video in which he was suspected to be brandishing a pistol at a party.

NAN also reports that the party was organised to celebrate the emergence of the newly elected National President of NURTW, Alhaji Tajudeen Baruwa.

The party, which took place on June 14 at Ijora 7-Up area, ended in violent clash between the two factions.

The suspect said he had been in custody of the gun for six months, but couldn’t use it for anything.

“I am not a cultist; the mistake I made was that I didn’t take the gun to the police.

“I just kept it in case we start all this street fight in my area.

“I am a member of the NURTW. There are two factions of the union now, but I am with the Baruwa caucus.

“We organised the party to celebrate our newly elected president.

“Although, we didn’t get any approval from the police; we didn’t block the road. The party took place inside a garden.

“When we were at the party, the other faction came and started bragging that the final result has not been declared and that they will later be the winner.

“They later started stoning us with broken bottles and the police later came,’’ he told NAN.

In his reactions, the Lagos Police Public Relations Officer (PPRO), DSP. Bala Elkana, said he had earlier issued a statement that the incident was a rival clash between members of the NURTW.

Elkana said though no life was lost, many sustained injuries.

According to him, the command has directed the DPO to arrest all NURTW members connected to the clash.

He said that the command would not tolerate any act of thuggery or hooliganism.