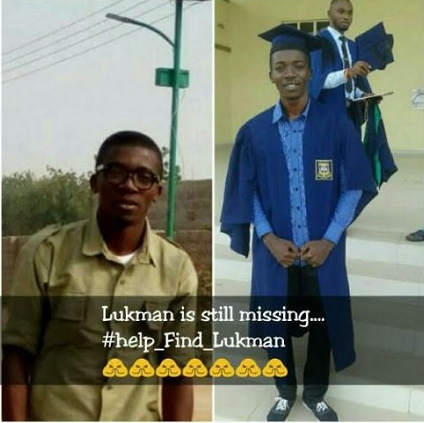 Mr. Babalola Sorunke aka Young Senator Lukman, who got missing while returning to his state of primary assignment, Zamfara State, is yet to be found. Sorunke, who graduated from the University of Ilorin (UNILORIN), was posted to Zamfara State for his youth service. Sorunke left his family house at Soyeye area of Abeokuta, Ogun State, on September 21 to board a bus in Ibadan to Anka Local Government Area of Zamfara State, where he was posted for his primary assignment.

However, none of his family members, relatives, friends and course mates have been able to reach him, while his phones have been switched off. His younger sister, who identified herself as Olayide, told our correspondent on phone yesterday that the family had been traumatised by his disappearance. She said: “He left home about 4p.m. on September 21. When I called him about 6p.m., he said he was still in Ibadan.

He said if he got a vehicle, he would travel that night, otherwise, he would sleep over in Ibadan. “But the following day, Thursday, his phones were switched off, on Friday the same thing. Then I decided to call one of his friends who said he was posted to Kaduna, not Zamfara.”

Olayide added that she had to call his brother’s girlfriend who sent a number to call someone in Zamfara, but there was no news of her brother. She said they had to go to Ibadan to inquire which bus must have conveyed her brother, after hearing of an accident involving a commercial bus and fuel tanker. “At Ogbomoso, police gave us the pictures of those who died but my brother was not among them.

We then asked for police report so that we can locate him through his last phone call on MTN network. Later, one of his friends called us that Sorunke had chatted with him on WhatsApp and confirmed that he did not travel that day,” she said.

According to Olayide, the confirmation proved that he actually arrived in Ibadan and slept somewhere. She added: “We have gone on air at the Broadcasting Corporation of Oyo State (BCOS). People have been calling us, but nothing has been established to locate him.