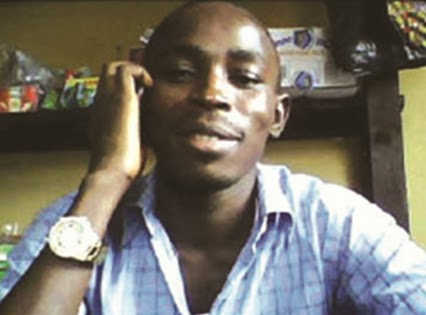 The town of Ikorodu is still mourning the loss  of Ogunsona Daniel Adekunle Adebambo who committed suicide in an uncompleted building in his area on New Year day.

The suicide is coming on the heels of the controversy surrounding the death of a mother of two, Mrs. Ibironke Sanni, 31, who allegedly committed suicide two weeks ago by gulping Sniper insecticide in Sholebo Estate, Ikorodu, over her husband’s alleged infidelity.

The body of Adebambo was found around 1 a.m. yesterday dangling from a rope tied to the hook of a fan in an uncompleted storey building at 1, Alice Ogunsona Street, Hilltop Estate, Eruwen, Ikorodu.

P.M.NEWS investigations revealed that Adebambo, 30, studied Architecture at the Obafemi Awolowo University (OAU) and did his national service in Abia State.

The deceased was found by his younger brother after reading the suicide note he left in their sitting room.

He allegedly blamed his action on his girlfriend’s father who refused to allow him marry his daughter.

A friend of the deceased disclosed that Bambo, as he was fondly called, killed himself because his fiancee’s father, who is from Ondo State, said his daughter cannot marry him because he is an Ijebu man from Ogun State.

Many of the sympathisers who gathered at his residence found the excuse for his action difficult to believe.

Efforts to speak with his fiancee proved abortive as she refused to talk.

The atmosphere at the residence of the deceased in Eruwen was gloomy as family members, friends and neighbours wore sombre look. Two ladies found leaving the compound lamented the death of the man and disagreed with the note he purportedly left stating the reason for taking his life.

Efforts to speak with his brother and other family members were also unsuccessfual as they refused to talk to our reporter.

They threatened to send the reporter out of the compound and confiscate his midget and camera.

A resident of the Hilltop Estate, Ibrahim Adeola, who said he participated in bringing down Adebambo’s body from the ceiling, recalled that he was dead and stiff when they brought him down.

“When the family raised an alarm and we came here, he was already foaming in his mouth and his hand was clenched in a fist. This signified that he struggled till he died,” he said.