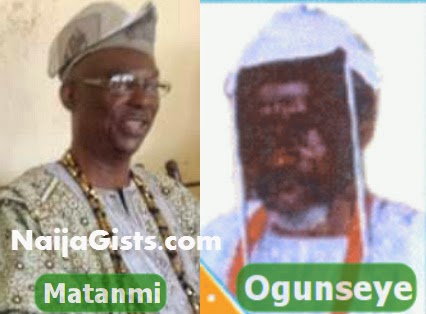 PUNCH Metro learnt that no fewer than six persons sustained injuries in the mayhem which broke out at about 1pm.

Our correspondent learnt that there had been rivalry between the two royal families ─ Oba Lasisi Ogunseye and Oba Abdulfatai Matanmi ─ over the years on who should rule the community.

Our correspondent learnt that the Matanmis were marking the remembrance of one of their late family members in the Ansarul area of the community when loyalists of the Ogunseyes stormed the venue with weapons.

It was gathered that the Matanmis, who had initially fled for safety, re-grouped at about 5pm of the same day and launched a reprisal on the Ogunseyes in a palace where some Baales loyal to the king were having a meeting.

In a visit to the troubled community on Wednesday, PUNCH Metro counted no fewer than eight damaged cars while two of the Baales’ cars were burnt.

It was learnt that Lasisi Ogunseye was on an assignment in Ibadan when the incident happened. Armed policemen from Odo-Eran and Ota police divisions were seen patrolling the area.

It was learnt that the Ogun State Commissioner of Police, Ikemefuna Okoye, also visited Ogunseye’s palace on Wednesday.

A resident, who craved anonymity for fear of being attacked, said the two factions had unleashed several attacks on one another.

He said, “As far as I know their disagreement had started as far back as 2001 when Olusegun Obasanjo was President. It was through his influence that Oba Ogunseye was installed. Meanwhile, Matanmi is the only king in Ijoko recognised by the state government.”

A mechanic beside Ogunseye’s palace, Mr. Bolaji Idowu, said he was battling with how to raise funds to fix the windscreens of his customer’s cars that were smashed.

He said, “My colleagues and I ran away when we heard gunshots. When we came back, we met our cars damaged. Some customers have come to take their cars while others may insist that we repair theirs.”

Ogunseye was not around when our correspondent visited his palace.

However, one of his sons, Prince Ahmed, said, “Documents, clothes, foodstuffs and even the king’s crown were burnt. They also injured a palace worker, Kunle. I had to hide somewhere. It was one man called Gafari that led them.

“Matanmi is a stranger here and he must leave our land for us.”

However, Matanmi’s son, Prince Semiu, denied the reprisal when our correspondent visited his father’s palace, which was under construction.

He said, “Ahmed Ogunseye and his boys came to disrupt the prayer we were holding in remembrance of my aunty. They injured my brother, Kayode, shot Kazeem and took him away. We do not know his (Kazeem’s) whereabouts as I speak. We did not retaliate. They destroyed their property to cover up their act.”

Also, Matanmi, who spoke with our correspondent on the phone, said a recent court ruling in the state, identified him as the legal king of Ijoko, adding that he had evidence to support his claim.