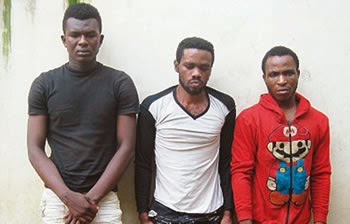 During their confession, the suspects identified as Okeke Christian, Paul Igwe and Akazue Nwakonuche claimed they only use toy guns to scare off motorists and passengers before robbing them.

They were arrested in Ikotun area of Lagos on December 11 while they were getting ready for an operation around 9:30pm.

“I came to Lagos in 2010 to stay with an uncle in Ikotun. That was where I met the gang. Later, my uncle travelled to India and left a small shop for me. It was Paul (Igwe) who brought the idea of robbing tricycle drivers and passengers to the gang. He also brought Nwankpa to join us.

“Our mode of operation is to use toy guns to rob motorists and passengers. All of us had toy guns and cutlasses. But on that Thursday, we went to the Ikotun Roundabout and entered a tricycle with the purpose of robbing it. At a point, we pointed our guns to the driver, and he melted.

“But when he suspected we had toy guns, he gave out a shout, and some vigilance members got after us immediately. They gave us a chase, pursuing us into the hands of the police.” – said Okeke Christian

“My role during the operation is to search the commercial bus, tricycle and abandoned bags for money, handsets and other valuables. Before I joined the gang, I used to sell ladies’ wares in Ikotun. It was Paul (Igwe) who brought me into the gang. Now, I regret taking that decision.”- said Akazue
“My alias is wiper. I am the gang leader. I brought the idea of robbing motorists, passengers and snatching tricycles. I met my gang members at our hemp smoking joint. One man named Roughman is the receiver of our snatched tricycles. He bought each from for us at N50,000.” – said the gang leader, Paul Igwe