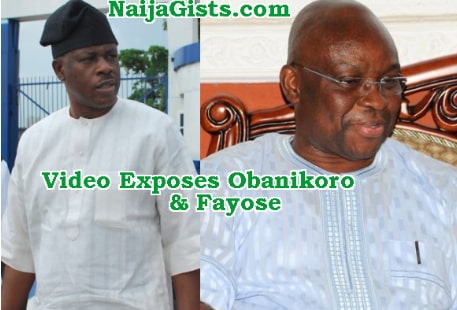 The corruption trial of the immediate past governor of Ekiti state, Ayodele Fayose will commence on Monday.

The EFCC is accusing the ex-governor of taking N4.65 Billion slush funds allocated by the Office of the National Security adviser under GEJ Administration.

Here is a statement the EFCC obtained from Obanikoro and other witnesses.

“During and before the Ekiti Governorship election in 2014 around June 2014. Mr. Ayodele Fayose who was then the candidate of PDP in Ekiti State called and asked if the NSA (Col. Sambo Dasuki rtd) has reached him (Obanikoro) with any information or message. Senator Obanikoro answered in the negative but promised to call the NSA and revert back to him.

“He spoke to the then NSA who informed him that he had a message which will be transmitted through him to Ayodele Fayose and further requested for an account in which the said message will be transferred or delivered for onward transfer or delivery to Ayodele Fayose. Senator Obanikoro then called Fayose and confirmed to him that a message will be delivered to him any moment from that time as confirmed by the NSA.

“He sourced for an account Slyvan Mcnamara Limited and forwarded same to the NSA, Sambo Ibrahim Dasuki. On 5th June, the first transaction of N200 million entered into the account and on 16th June, 2014, the sum of N2 Billion was transferred into the account, making it a total sum of N2.2 Billion paid into Mcnamara with Diamond Bank domiciled in Lagos.

“He acknowledged the receipt of the funds to the NSA who instructed that the funds be given to Ayodele Fayose, the funds came from the office of the National Security Adviser and SAS imprest main account respectively.

“Ayodele Fayose called Senantor Obanikoro several times before the money eventually came and on his last call, he confirmed the transfer of the money into the account and the instruction of NSA. Ayodele Fayose said N1.2 billion of the money should be made available in cash while the balance should be converted into dollars. These instructions were carried out by him (Obanikoro).

“The sum of about N1 billion was given to various Bureau de Change for conversion into dollars. The dollars that were available about $4 million plus was personally handed, delivered to Fayose Ayodele, then candidate of PDP at the time by him in Ado Ekiti at Spotless Hotel, while the balance of $1 million was later collected by his SAA late Justin Erukea who brought it to him in Ekiti which he also handled over to Mr. Ayodele Fayose.

“He was not privy to the discussion between Fayose and the NSA. The balance of N1.2 billion was left and later withdrawn cash from the account in Lagos and airlifted to (Ado Ekiti) Akure where he handed over to Fayose’s associates Mr. Biodun Agbele. On arrival in Akure, he called Mr. Fayose to reconfirm, the instruction to hand over the money to Mr. Agbele who received him on arrival in Akure and reconfirmed the instructions.

The EFCC has listed 22 witnesses including a former Minister of State for Defence, Senator Musiliu Obanikoro, who allegedly ferried the N1.219billion and $5m in cash in two chartered jets to Fayose.