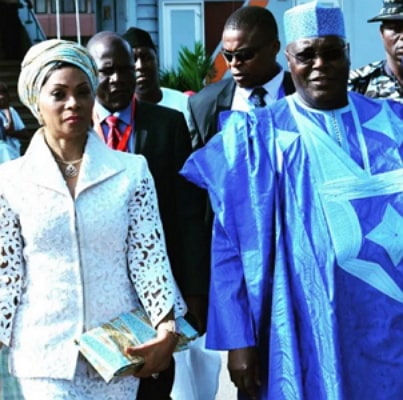 By Adetutu Audu, The Nation

Dr Jennifer Jamilah Atiku, wife of the former vice-president, Atiku Abubakar and Peoples Democratic Party’s presidential candidate, is said to be making underground moves for her hubby to actualise his presidential dream come next year.

The Anambra State-born former journalist, who has been out of circulation since the exit of her husband from office, is gearing up to occupy the office of the first lady.

Fondly called Jamilah by her husband, it was she who aided Atiku’s dream of starting an American-styled university in the early 2000s, at that time; she was a doctoral student at the American University in Washington DC.

Her project supervisor, Jim Goodman was invited to dinner in their home in Washington and the couple introduced the project to him. He was excited and took it up with the authorities of the American University, Washington.

After a long hibernation from the spotlight, which coincided with her husband’s apparent diminished influence in the power equation of the country, she is set to take over her place in the social circuit again.

Recently, she drew family, friends and associates to Dubai for her son, Chuka’s wedding. She was seen glowing as she mingled with all and sundry. She has not toned down her level of socializing.

She enjoys the love and confidence of her powerful husband, little wonder one of the administration buildings in the America University of Nigeria,AUN privately owned by the former VP was named after her.

Formerly known as Jennifer Iwenjiora in her days at the Nigerian Television Authority, she metamorphosed from being a simple TV reporter to one of the wives of a former Vice-President. Highly cerebral, Jennifer embraced Islam and changed her name to Jamilah after her marriage to Atiku.

Her marriage to Atiku, to some came as a shock, being an Igbo woman. But to another set of people, her choice was a fulfillment of who she is – bold, intelligent, fierce and a go getter.