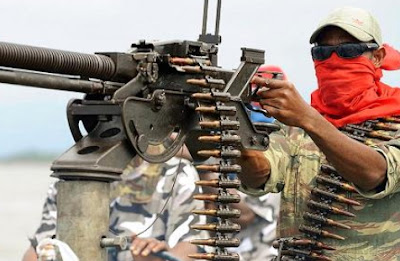 It has been a long time since I last wrote about you. Today I have chosen to write to you. How is everything? Hope life is treating you well?

I am writing you as a result of your last statement in which you threatened to resume your attacks on major oil facilities in the Niger Delta.

In a lengthy statement authored by your spokesman, Murdoch Agbinibo, you threatened to attack offshore facilities, such as Bonga, Agbami, Akpo Britania-U and the Egina FPSO. Haba!

You also reiterated your call for the restructuring of the country as the only answer to your anger against Nigeria. Good talk.

Surprisingly, you lashed out at the military for killing notorious kidnapper and waterways robber Kareowei. It mattered not to you that many a life had been wasted by your hero. Yet you admitted that Kareowei and his gang were common criminals who brought pain to your people.

You also took on Niger Delta elders, who you described as ‘irresponsible’ because the region has not achieved ‘any meaningful’ result. You also hinted of your resolve not to listen to these ‘irresponsible’ elders any more.

There is also another point you made and that bothers on interventionist agencies that are ineffective at addressing your challenges.

I was shocked when I got to the part where you urged all freedom fighters across the Niger Delta to put the fear of death aside and fight till the last drop of blood when engaged in a gun duel with the Army. You described that as a path to glory. What a glory!

I know you will not take my advice. As a matter of fact, you d not have to take it. But I will make my point anyway.

Now my full take on the issues you raised: Two wrongs do not make a right. The government has failed the people. No doubt. But there are many legal ways of representation.

I am aware that not few youths in the region believe its problem is the leaders. Once the leaders get their dues from the oil majors, others can go to hell. They care less about the people. They care more about themselves.

I need to let you know that not a few youths also believe you are not fighting for them. They believe you are just frustrated. They also feel that by bombing oil facilities, there will be oil spills everywhere and life will become more difficult. Innocent people will suffer and ultimately we will be the loser for it.

Bros, I think you also need to interrogate your governors. What has happened to the bulk of the money that your own people who have been governors have been given? How much of it have they spent developing your land? What is the guarantee that they will not end up still wasting the money if the region is allowed to control its resources?

You will understand my drift if you look at past efforts of the Federal Government to bring succor to the region. Oil Mineral Producing Area Development Commission (OMPADEC) was perhaps the first real attempt to bring succor to the Niger Delta. But bros Avengers, OMPADEC achieved next to nothing. It was replaced years later with the Niger Delta Development Commission (NDDC). One of the first things the NDDC thought of was a Masterplan for the region. It was done over a decade ago.

The Niger Delta Masterplan is a document that is as old as the NDDC, the agency which worked with other stakeholders in the region to design this plan whose dream was to turn the creeks around by 2020, which is just two years away.

Work on the Masterplan was started in 2001 soon after the NDDC was established. Former President Olusegun Obasanjo, in his preface to the Masterplan, was so optimistic that with the plan, the Niger Delta would get its groove.

But the NDDC, which is supposed to drive the development of the area, has been bogged down by internal and external factors. There were instances where one contract was awarded to two or three contractors. Many were just interested in taking money meant for a road, hospital or other projects and did not care to do the job.

Like I noted on this space last week, there were allegations that members of staff of the NDDC were colluding with outsiders to institute legal actions against the commission and later come and push for out-of-court settlement, after which they shared the settlement money from NDDC. The commission, at a point, had over 400 court cases against it in courts.

A presidential report on the commission showed that it also got into projects with nothing to do with its mandate as an interventionist agency. What on earth was NDDC doing renovating Port Harcourt Club and commissioning a study on the generation of electric power from gully erosion sites?

I have gone this much into the past and the recent past to show that those who say leaders in the region have part of the blame for its woes are not wrong. The people who have manned NDDC were picked from the region and the people who manned OMPADEC also had their roots in the region.

I agree with you that the oil giants and the Federal Government have not given the region their best. The token they are supposed to give to the region through the NDDC is even a problem to them. The Federal Government also owes trillions of naira. So, the commission has far less than it needs and to make matters worse, people still steal the inadequate cash using all kinds of tactics.

Bros Avengers, let me leave you with my final take: Development can only come in times of peace. When there is peace, foreign and local investors will come and jobs which we have been clamoring for will be created.

But in the absence of peace, great hunger will remain in the land. In fact, hunger will build castles everywhere and the people starve of daily bread. That is bad. It is not flattering at all.

Continue Reading
You may also like...
Related Topics:avengers, bros, Letter

Obasanjo’ Criticism Of Buhari Is Sentimental, Cruel, Selfish & Least Expected From An Elder Statesman
The Ignorant Politician & The Charismatic Sycophant