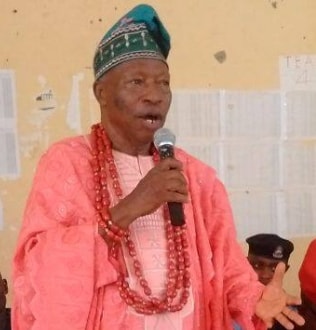 The Police in Ekiti State have arrested a suspected mentally deranged man who killed the Onise of Odo Oro, Oba Gbadebo Ogunsakin.

The suspect stabbed the traditional ruler with knife on Monday and bolted away after committing the crime.

The king was killed shortly after chairing a meeting with his chiefs where matters of community development were said to have been discussed.

The Police Public Relations Officer (PPRO), Caleb Ikechukwu, in a telephone chat with The Nation on Tuesday gave the name of the suspect who committed the regicide as Omoniyi Ademola Stephen.

Ikechukwu, a Deputy Superintendent of Police (DSP), disclosed that Ademola was arrested around 4.30 pm on Monday around Ajao Market in Ado-Ekiti.

He said: “The suspect has been arrested and he was brought in under investigation.

Ikechukwu promised that the police will be professional and thorough in looking into the circumstances leading to the killing of the traditional ruler.”

The suspect was said to have come to the palace and sat on the throne and claiming to be king before he was chased away.

A source in the community revealed that the suspect attacked the monarch who was said to be trekking to his private residence few meters away from the palace.

The monarch’s driver had taken his official vehicle for routine servicing when disaster struck.

The source said: “Ademola who is believed to be mentally challenged, resulting from his various acts of drug abuse were reported to have recently adopted some funny stunts.

“One of these was by going about various places pasting inscriptions around the town claiming he is the king, and wants to take his throne.

“His attitude got out of control in the early hours of Monday, 20th August, 2018 when he stormed the palace ahead of a meeting of the king with the chiefs in council and sat on the King’s stool claiming he is the right owner.

“One of the chiefs who must have got to the venue of the meeting met Ademola constituting nuisance informed the king.

“And when the other chiefs arrived for the meeting along with the king, he was reportedly chased out of the palace with cane and the meeting lasted.

“The chiefs departed after the meeting, leaving behind the king, who must have preferred to exercise his body strolling, taking a walk through the short distance from the palace to his residence which is less than 500 meters interval.

“It is unclear if the chiefs on their way saw Ademola laying seige, but the king was killed at the junction of the palace which is stone throw to the palace and his residence by Ademola who must have laid ambush believing the king would definitely come through the only access road linking the Odo Oro township main road to the palace.

“It was reported that a young lad carrying umbrella behind the king had rushed home to informed the queen, that someone was punching the king, not knowing it was a repeated stabbing by the assailant.

“Before rescuers could move closer to he scene, the assailant was said to have jumped into the nearby bush and escaped, he was trailed up to Ijesa Isu Rd,and said to have entered into the thick bush again.

“The king was soaked in blood and confirmed dead upon arrival at the State Specialist Hospital, Ikole.“

Continue Reading
You may also like...
Related Topics:ekiti, nigeria, regicide