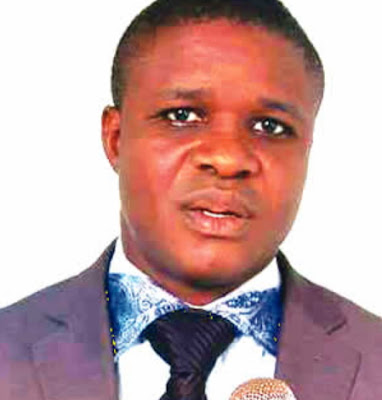 Pastor Chukwudi Okoh, a Lagos-based cleric and the founder of Kingdom Fire Ministry Int’l has called on the Pentecostal Fellowship of Nigeria, Christian Association of Nigeria, and the Nigeria Police Force to investigate a threat letter purportedly written to him by some people who claimed to be members of the Ogboni Fraternity.

Okoh said he had gone to his church auditorium in the Okokomaiko area of Lagos State on November 7 for a meeting with other church leaders when he saw the letter which he thought was a prayer request.

On opening the letter, the 52-year-old Ebonyi State indigene said he discovered that it was a threat to his life over his involvement in the destruction of traditional shrines and conversion of some idol worshippers to Christianity.

Our correspondent, who saw a copy of the letter, observed that it was signed by two unnamed persons who claimed to be ‘Secretary’ and ‘Akpino Grandmaster’ of the sect.

They claimed to be officials of the western headquarters of the group based in Abeokuta, Ogun State.

The letter, dated November 3, read, “Dear Chukwudi Okoh; We the Aborigine Fraternity of Nigeria hereby warn you against character assassination. You are warned to desist from destroying our religion in the name of your confession; turning our members away from our ancestral traditional way of worship. We have sent out men to warn you on several occasions, but you (refused to) adhere to our warning. 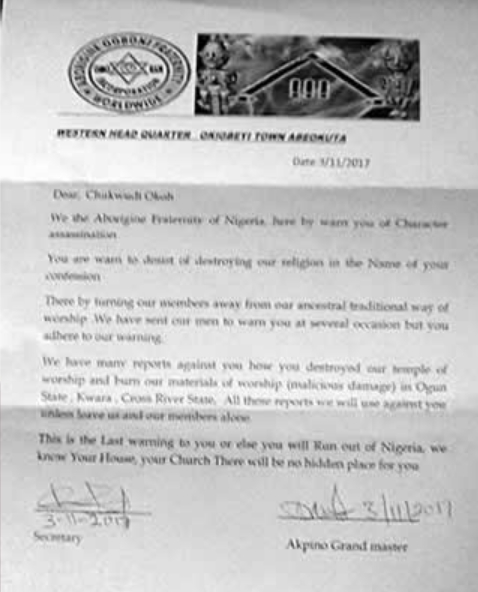 “We have many reports against you (on) how you destroyed our temple and burnt our materials of worship (malicious damage) in Ogun, Kwara, Cross River states. All these reports will be used against you unless (you) leave us and our members alone. This is the last warning to you, or else you will run out of Nigeria. We know your house and your church; there will be no hiding place for you.”

The father of five, who said he had already reported to the PFN and CAN leadership in the Ojo area, said he believed some people were out to destroy him.

He said, “I went to church that day for a meeting when I saw the letter on the altar. I was with three of my subordinate pastors. I thought it was a prayer request and when I opened it, I saw it was a threat letter. I reported it to the PFN chairman and we prayed together over it. I also reported it to CAN.

“This is not the first time I will be getting such a threat. Sometime in September, a motorist waylaid me on the road with his car. He said I was disturbing his group and I should stop or else they would come for me. He then quickly drove off.”

We learnt that the cleric had reported the case at the Okokomaiko Police Station.

Okoh, during a chat with our correspondent, recalled destroying some shrines on the invitation of people who converted into the Christian faith during some of his evangelical outreaches.

He said, “I am a full time pastor and I have been in ministry for over 24 years. I have built churches in four different parts of Lagos, but they were demolished by the government. My present church location is our fifth and hopefully last building.

“I organise crusades with medical treatments for my host communities. There are times people confess to belonging to Ogboni Fraternity and they bring their materials and books for burning. I have done this many times in different parts of the country.

“There was a former Ogboni member that I converted. I can’t say I have any regrets because such is part of my calling,” he added.