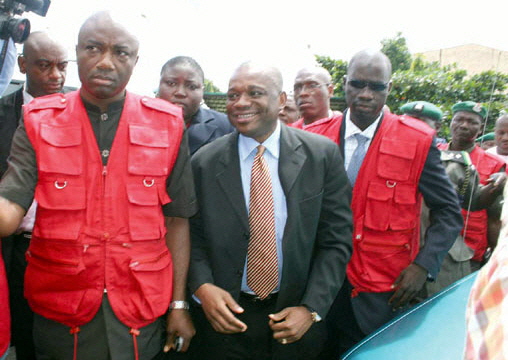 The EFCC said yesterday that a former Director of Finance and Account at the Abia State Government House, Umuahia, Jones Udeogu, once claimed that the state engaged the company of a former governor of the state, Orji Kalu, to import Okrika (second-hand clothes) from Cotonou, Benin Republic.

According to an investigator with the EFCC, John Egem, Udeogu made the claim when he was confronted with documents showing movement of funds from the coffers of the Abia State Government House into the Inland Bank account of Kalu’s private company, Slok Nigeria Limited.

Egem said when Udeogu was, however, asked to produce documents showing any contractual agreement between the government house and Slok Nigeria Limited, he was unable to do so.

Egem appeared on Tuesday as a prosecution witness before the Federal High Court in Lagos where Kalu, Udeogu and Slok Nigeria Limited are being tried for an alleged fraud of N2.9bn.

The EFCC, in the charges, claimed that Kalu and Udeogu conspired to use Slok to divert public funds when the ex-governor held sway in Abia State.

But the defendants, who are being tried before Justice Mohammed Idris, pleaded not guilty.

At the resumed trial on Tuesday, Egem, who was led in evidence by the EFCC prosecuting counsel, Mr. Rotimi Jacobs (SAN), narrated to the court how cheques were allegedly issued in the names of certain identified and fictitious officials of the Abia State Government House to move money out of the government’s coffers.

The investigator said, “In the course of our investigation, we discovered the following: That cheques were raised from the Abia State Government House accounts in the names of serving officials in the government house.

“They were opened as across-the-counter cheques; the officials would proceed to the bank to cash the cheques. In some cases, the cash payments would be used to purchase bank drafts in the name of Inland Bank, Apapa (Lagos) branch, and the payment ends up in Slok Nigeria Limited’s account in the same Inland Bank, Apapa branch.”

The witness gave the names of the government house officials in whose names the cheques were allegedly raised as Udeogu, Romanus Madu, Michael Akpan and some other fictitious names.

Egem said the EFCC obtained a search warrant and raided the premises of Slok Nigeria Limited, during which the anti-graft agency recovered some vital documents, including an audit report, which disclosed the directors of the company.

According to him, the document dated October 20, 2014 revealed that Slok Nigeria Limited was registered on May 6, 1987 and had its registration number as RC94896.

He said the document listed Orji Uzor Kalu, Ogbonnaya Kalu, Ifeoma Kalu, Nnana Uzor and others as the directors of the company.

He said further search was conducted at the Corporate Affairs Commission.

Egem said the EFCC’s effort to interrogate the directors of Slok failed as they failed to respond to invitation.

He, however, said Kalu and Udeogue honoured EFCC’s invitation and made statements to the anti-graft agency.

He said when Udeogu was confronted with the petition and other documents leading to the investigation, he claimed that the funds transferred into Slok’s account were meant for the importation of okrika (second-hand clothes) from Cotonou, Benin Republic.

The witness said, “Further investigation also disclosed that the payments were claimed to have been used to purchase okrika materials from Cotonous in Benin Republic. It was Jones Udeogu who told us this.

The witness said Kalu, Udeogu, Madu and Akpan were all invited and interrogated and they all made statements.

The court admitted the statements as exhibits as the defence counsel did not object.